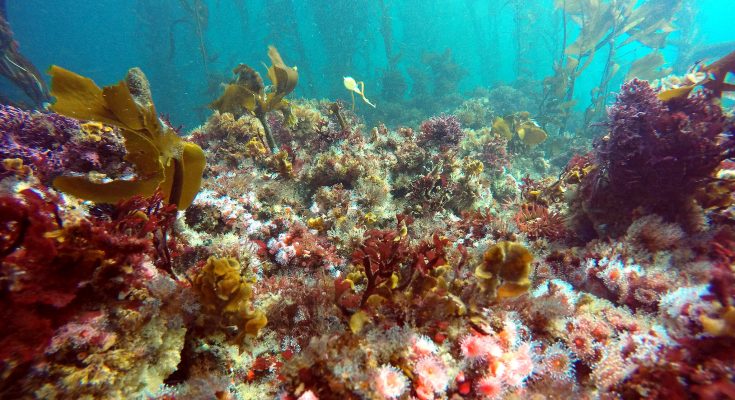 The seafloor at this San Nicolas Island monitoring site exhibits an incredible diversity of invertebrates and algae. While urchins are present at these sites, they were not observed to form urchin-barrens in the nearly 40 years of subtidal monitoring (photo taken 2018). Credit: Zachary Randell.

Restoration efforts for kelp forests may be most effective in areas where the bedrock seafloor is highly contoured, research by Oregon State University suggests.

The findings, published today in the Proceedings of the National Academy of Sciences, are important because kelp, large algae with massive ecological and economic importance around the world, are under siege from environmental change and overgrazing by urchins.

The study, led by recent graduate Zachary Randell when he was an Oregon State doctoral student, shows that kelp forests in areas with ocean floor ruggedness—scientifically termed substrate complexity or surface rugosity—tend toward stability.

“Kelp forests are declining worldwide due to different combinations of environmental change and lower numbers of the predators that control urchins, like sea stars, cod and sea otters,” Randell said. “More and more kelp forests are transitioning into what are known as ‘urchin barrens,’ an alternative arrangement of the ecosystem with dramatically fewer species, including species of recreational, commercial and conservation interest.”

Kelp is a foundation species that occupy nearly 50% of the world’s marine ecoregions. They especially thrive in cold water, where they form large aquatic forests that provide essential habitat, food, and refuge for many species. Their sensitivity to certain growing conditions means climate change and a warming ocean are particularly problematic for them.

Kelp is often harvested for use in products ranging from toothpaste and shampoos to puddings and cakes, and they also help support nutrient cycling, shoreline protection, and commercial fisheries such as rockfish. Economists place kelp’s value in the range of billions of dollars annually.

The research group that also included OSU’s Mark Novak and the USGS’s Michael Kenner, Joseph Tomoleoni and Julie Yee is the first to demonstrate a link between substrate complexity and kelp forest dynamics, Randell said.

“But sites with a lot of physical structure along the seafloor showed resilience—the forested state was able to persist, even when similarly disturbed compared to the flat locations,” Randell said. “The seafloor connection needs further study given recent kelp declines and a push for restoration efforts like outplanting or urchin removal. Understanding the factors behind tipping points and switches between states, which many types of ecosystems are subject to, is key to effective management.”

The research suggests restoration efforts could target areas with abundant substrate complexity to create “hotspots of resilience,” Randell said. Where complexity doesn’t exist naturally, it could be manufactured—for example, via artificial reefs—he added.

“Those artificial reefs could also be the focus of outplanting recovery efforts of sea urchin predators, such as the captive rearing and release of sea stars,” he said. “The reefs could be constructed as optimal environments for urchin predators and also for urchins and the drift algae that urchins eat.”

Another interesting component of the findings, Randell noted, is that urchin density in a healthy kelp forest was often similar to that of an urchin barren; thus the animal that often gets a bad rap as a destroyer of kelp forests may actually be just one piece in a much larger puzzle, he said.

“The common practice of culling urchins will decrease grazing rates only in the short term and won’t by itself bring about kelp forest stability,” Randell said. “Urchin removal is likely to be most effective for jump-starting kelp recovery when efforts are focused on the high-complexity substrate and paired with other tactics like kelp outplanting.”