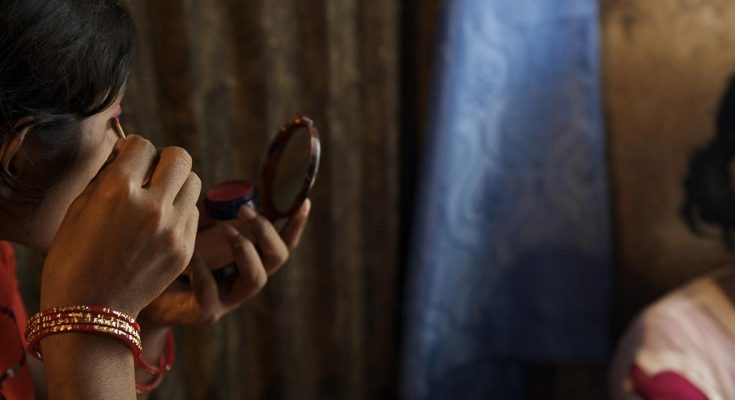 Munni was married at age 14, but after her husband left when she became pregnant, the Bangladeshi girl was sold to a brothel by a man who offered to find her a job. Credit: UNICEF/Shehzad Noorani

Every country in the world is affected by human trafficking, whether as a country of origin, transit, or destination for victims. The vast majority of those trafficking women and girls, do so for purposes of sexual exploitation.

Displaced girls like 11-year-old Anastasia, seen here leaving the Sighetu Marmației border crossing on a bus in northern Romania, are at particular risk.

Displaced women and girls are especially at risk from gender-based violence, according to the UN Children’s Fund (UNICEF), which points out that conflict exacerbates the problem.

In Gabon’s Government-owned centre for children in difficulty and at risk, UNICEF supports the youngest victims of trafficking and illegal migration.

When conflict forces children to leave their homes, they risk injury, death and the prospect of being trafficked or forced into child labour – 30 per cent of those trafficked for forced labour, are female.

From child marriage to human trafficking, 18-year-old UNICEF-Reporter Rifa uses a computer tablet to raise awareness of the dangers that girls face, in the Cox’s Bazar refugee camp, in Bangladesh.

Human traffickers now have a huge presence in cyberspace with digital platforms used to recruit, exploit, and control victims; reach out to potential clients; and hide criminal proceeds – taking advantage of the speed, cost-effectiveness and anonymity of the Internet.

Societal violence has a profound impact on a child’s ability to remain in school, especially in neighbourhoods where criminal gangs can act with impunity, leading to executions, movement restrictions and death threats, according to UNICEF.

While walking home from school in Yoro, Honduras, the 13-year-old girl in the middle was grabbed, thrown into a van, beaten, raped and released one hour later.

UNICEF works in Niger to care for children on the move and at risk from traffickers, offering family tracing and reunification services, temporary care, and psychosocial support.

Thousands of migrant children have been repatriated after perilous journeys where they’ve faced the threat of being trafficked, sexual exploitation and discrimination. Border closures and other COVID-19 containment measures have rendered vulnerable groups even more at risk.