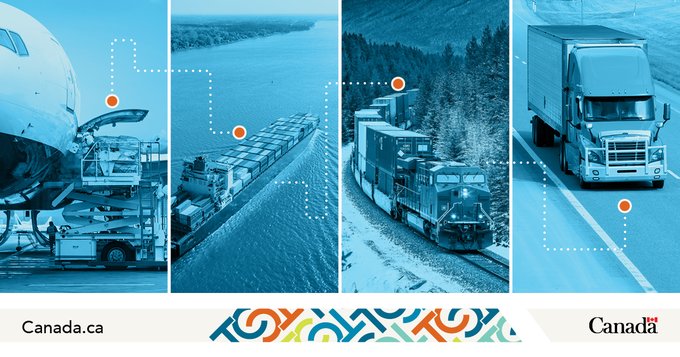 Industry groups have been reportedly warning that with 12,000 to 16,000 truckers sidelined by the policy there are fewer drivers to make the trip.

In a letter signed by dozens of Canadian and U.S. chambers of commerce and major industry groups, business leaders called on all levels of government to “immediately clear” the Windsor and Coutts crossings and bring an end to these “illegal blockades.”

“Given the importance of ensuring that the supply of food, medical products, and industrial goods can continue, the disruption at the Ambassador Bridge is an attack on the well-being of our citizens and the businesses that employ them,” the letter reads.

“I believe it is very serious and potentially grave. It is already having a huge impact on Canadian industry and Canadian workers,”  said Bill Blair Canada’s Minister of Emergency Preparedness at a press conference in Ottawa, adding that a quarter of all Canada-U.S. trade moves through Ambassador Bridge

“We’ve seen the criminal acts, acts of thuggery, and the obnoxiousness that they’ve inflicted on the people of Ottawa. Now they’re blocking the highways leading into our ports of entry. They’re putting their foot on the throats of all Canadians, said Blair.”

Transport Minister Omar Alghabra reportedly said that central Canada could soon see empty store shelves because so much of the region’s fresh food and produce comes into the country across that bridge.

Windsor Mayor Drew Dilkens said the protesters appear to be determined to stay. “They feel such a passion for this particular cause that they’re willing to die for it,” he said.

“Countries around the world are opening up. Canadians are ready to get their lives back but it seems like the prime minister wants to live in a permanent pandemic,” Conservative interim leader Candice Bergen said during a question period, repeating her call for Trudeau to dump vaccine mandates and travel restrictions.

At a news conference in Ottawa that excluded mainstream news organizations, Benjamin Dichter, one of the protest organizers, said: “I think the government and the media are drastically underestimating the resolve and patience of truckers.”

“Drop the mandates. Drop the passports,” he said.