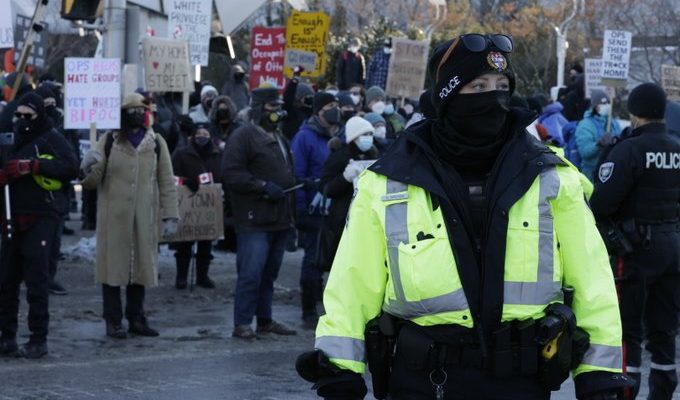 Ottawa/CMEDIA: Ottawa Mayor Jim Watson declared a state of emergency in Ottawa on Sunday night as the truckers convoy of estimated 5,000 people and 1,000 trucks and personal vehicles continued to disrupt the normal life of parts of Ottawa during the weekend.

The downtown core was inaccessible to the truckers’ demonstrations and traffic due to the ongoing road closures.

The city of Ottawa will be bringing in more police and resources, said Watson to end the demonstration in the coming days.

The baseball stadium parking lot filled with anti-pandemic rule demonstration that arrived in Ottawa 10 days ago was descended by dozens of heavily armed police officers on Sunday night and cut off fuel supplies from the “Freedom Convoy” participants, seizing more than 3,000 litres of fuel, and disabled the supply of fuel to protesters by fencing the areas storing the fuel.

By Sunday evening the police reportedly arrested seven people and issued more than 100 tickets for offences including driving while prohibited, excessive honking, not wearing seat belts, having alcohol readily available and property damage.

More than 450 tickets have been issued since Saturday morning.

Several other protests took place across the country in support of Ottawa’s main convoy.

About 10 protesters stood firm in front of fuel supplies that were stored toward the southern end of the lot.

The main organizers of the convoy are still determined to stay until all COVID-19-related mandates are lifted.

A video statement was issued by the former RCMP officer Daniel Bulford, who acts as the convoy’s security to convoy participants to hold the line which was shared on TikTok

Although more than $10-million fundraiser had been removed from GoFundMe, the truckers’ fundraising efforts are still going on through other online platforms, including a bitcoin wallet.