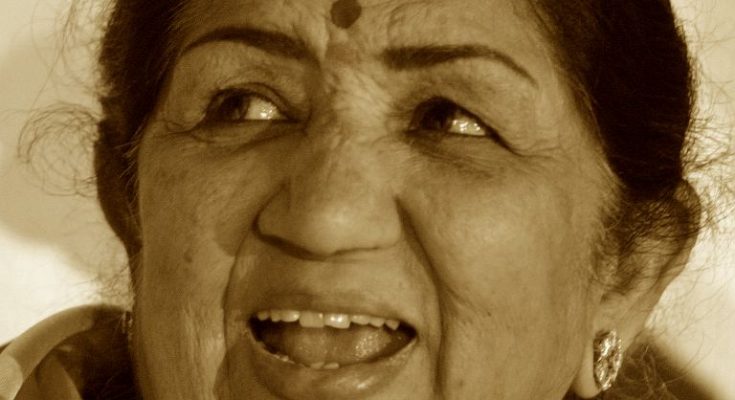 Today (Feb 6, 2022) is not just another Sunday morning for India. Countless Indians are in tears and seeking solace in the very words of the song- Aye Mere Watan Ke Logon- that Lata Mangeshkar had gifted a bruised nation after the ignominious defeat in the hands of China in the 1962 war.

The legendary singer, who consoled the wounded, grieving hearts of India and moved the country’s first prime minister Jawaharlal Nehru to tears with her tribute to the martyred soldiers of the 1962 India-China War singing the heart-rending ‘Ae Mere Watan Ke Logon’, is no more.

India plunged into a spell of deep grief and mourning on Sunday to realize that the singer- who stole billions of hearts with her melodious voice expressing every single human emotion- love, pain, loss, joy, patriotism- is no more. 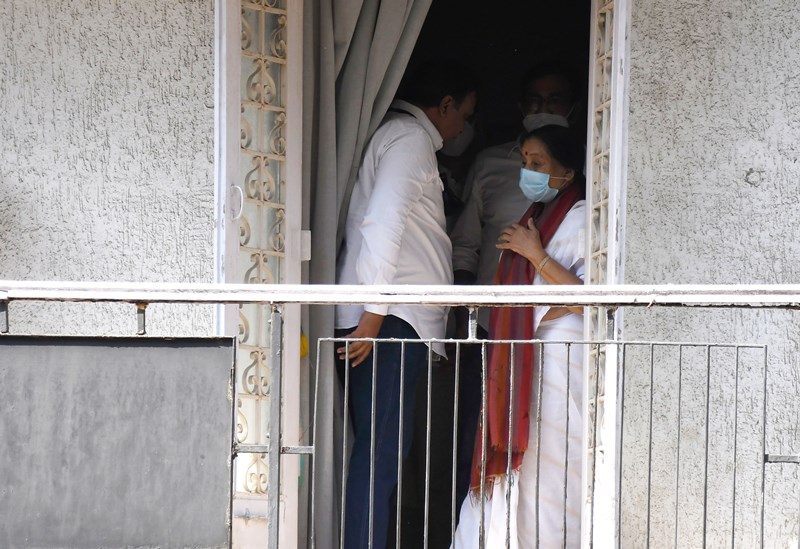 MUMBAI, FEB 6 (UNI)- Veteran singer Asha Bhosle at ‘Prabhu Kunj’ as she arrives to pay her last tributes to Bharat Ratna and legendary singer Lata Mangeshkar in Mumbai on Sunday.

An era has just not come to an end with the demise of India’s greatest singing sensation. India on Sunday lost its soul as the singer, who is synonymous with the nation’s playback singing and musical journey for over  seven decades, died in Mumbai’s Breach Candy Hospital where she was being treated for Covid-19 and pneumonia symptoms for over a month.. The recipient of Bharat Ratna was 92.

While a day in the life of India is unimaginable without her songs, her rendition of “Aye Mere Watan Ke Logo” ( O’ people of my country”), the Hindi patriotic song written by Kavi Pradeep and composed by C. Ramchandra to commemorate the martyrs of Sino-Indian war, remained a song to kindle patriotism in every Indian till today.

Her duets with male singers like Kishore Kumar and Mohammad Rafi are all time favourites of Indian music lovers.

Lata Mangeshkar was born on 28 Sept 1929 and from an early age, she started working, recording songs in over a thousand Hindi films and singing in over 36 Indian and foreign languages. Her best songs are in Hindi, Marathi, and Bengali.

Late Bollywood thespian Dilip Kumar once said of her as quoted in Variety magazine: “The way the fragrance of a flower has no color, a flowing spring or cool breezes belong to no country, the smile of an innocent child has no religion, similarly Lata Mangekshar’s voice is a miracle of nature’s creativity.”

She was conferred the Dadasaheb Phalke Award (India’s highest recognition in cinema) in 1989. In 2001, she was awarded India’s highest civilian honour, the Bharat Ratna.

She is the second vocalist, after late M. S. Subbulakshmi, to receive this honour. She was also the recipient of highest civilian award of France- Officer of the Legion of Honour- in 2007.

She won several National Film Awards besides Filmfare Awards and had performed in the Royal Albert Hall in London.

Lata had begun her career as a singer and actress in 1942 when she was just a teen (13-year-old) after her father died.

Master Vinayak (Vinayak Damodar Karnataki), who owned the Navyug Chitrapat movie company and was a family friend, gave her the first break when he started looking after them.

She sang the song “Naachu Yaa Gade, Khelu Saari Mani Haus Bhaari”, which was composed by Sadashivrao Nevrekar for Vasant Joglekar’s Marathi movie Kiti Hasaal (1942), though the song was finally not in the film.

Vinayak then introduced Lata in a small role in Navyug Chitrapat’s Marathi movie Pahili Mangalaa-gaur (1942), in which she sang “Natali Chaitraachi Navalaai” which was composed by Dada Chandekar. “Mata Ek Sapoot Ki Duniya Badal De Tu” for the Marathi film Gajaabhaau (1943) was her first Hindi song.

She then moved to Mumbai, the hub of filmmaking in India now famously known as Bollywood, when Master Vinayak’s company relocated there in 1945.

She started learning Hindustani classical music from Ustad Aman Ali Khan of Bhindibazaar Gharana. She and her sister- the other legendary singer Asha Bhonsle- began singing in films and acting and finally she was introduced to music director Vasant Desai.

Since 1950s she became a rage in Bollywood and never looked back. With Lata becoming synonymous with Bollywood playback singing, it is pointless to mention the famous songs she sang. She actually captured every human emotions with her mellifluous, soulful renditions decade after decade.

In 2005 she had almost after 14 years recorded a song for composer Nadeem-Shravan; “Kaise Piya Se” for the film Bewafaa (2005).  She recorded songs till 2011, including the song “Jeena kya hai, jaana maine” for the sequel of Kapil Sharma’s queer love story Dunno Y… Na Jaane Kyun.

In Nov 2012, she launched her own music label, LM Music, with an album of bhajans, Swami Samarth Maha Mantra, composed by Mayuresh Pai. She sang with her younger sister Usha on the album.

In 2014, she recorded Shurodhwani (Bengali songs, including poetry by Salil Chowdhury), also composed by Pai.

In March 2019, she released the song “Saugandh Mujhe is Mitti ki”, composed by again Mayuresh Pai, paying a tribute to the Indian Army.

The illustrious, extraordinary journey finally came to an end on Feb 6, 2022 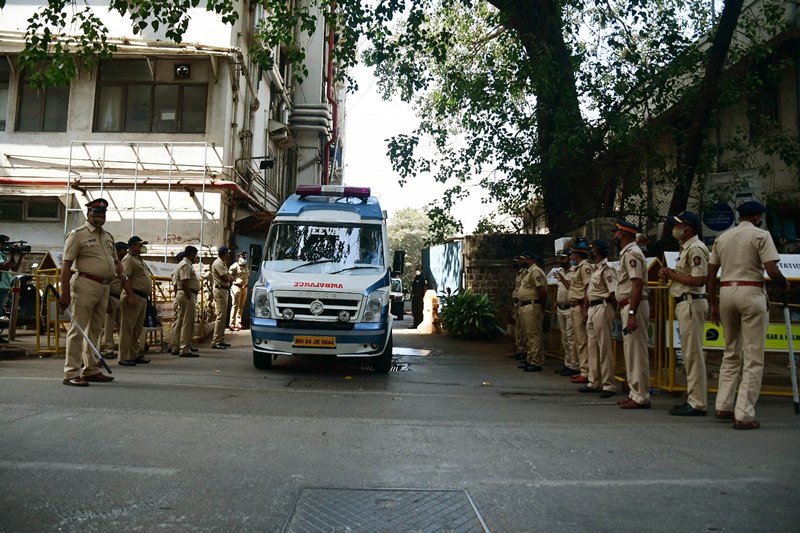 MUMBAI, FEB 6 (UNI)-An ambulance carrying the body of Late Lata Mangeshkar arrives at her residence ‘Prabhukunj’, in Mumbai on Sunday. 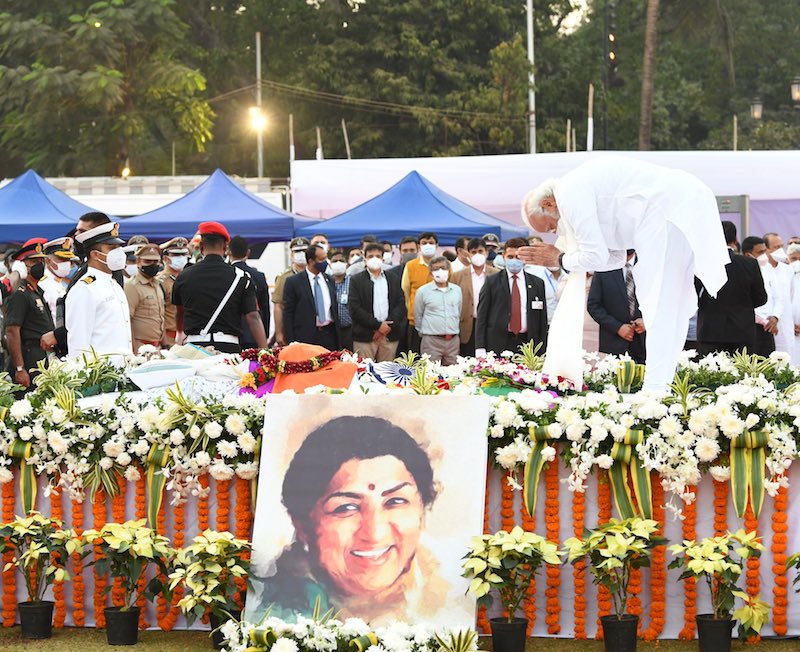 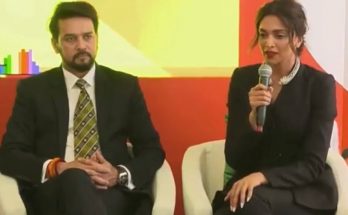