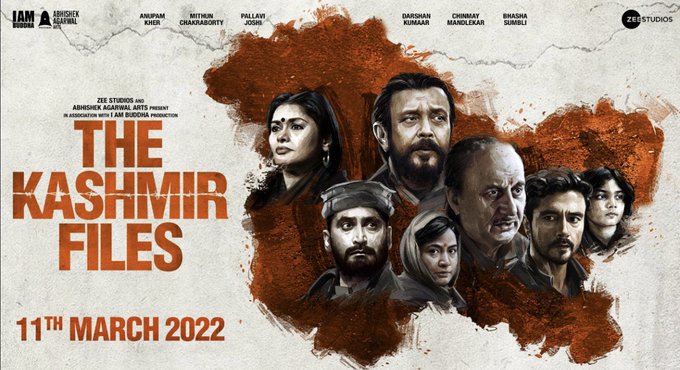 IBNS: Vivek Agnihotri’s The Kashmir Files, a film based on video interviews of the first generation victims of the Kashmiri Pandit community’s genocide in 1990,  opened in theatres on Friday with a promising box office figure albeit mixed critical reception. Amid a rave review by the audience among whom it touched an emotional chord, the film is slated for a record run as its box office collections more than doubled on Day 2.

The film, shown on around 630 screens in India, collected Rs 3.55 crore on its first day.

According to Trade analyst Taran Adarsh, The Kashmir Files registered 139.44 percent growth, the highest ever growth on day 2 since 2020.

On Saturday, Taran Adarsh shared the film’s figures for the first day. His tweet read, “#TheKashmirFiles springs a BIGGG SURPRISE on Day 1… Despite limited showcasing [630+ screens], the film goes from strength to strength during the course of the day… Evening and night shows EXTRAORDINARY… SOLID GROWTH on Day 2 and 3 is a surety… Fri Rs 3.55 cr. #India biz.”

The film has been co-written by Agnihotri and Saurabh M Pandey and is produced by Zee Studios and Tej Narayan Agarwal, Abhishek Agarwal, Pallavi Joshi, and Vivek Ranjan Agnihotri.

The film was earlier slated to release in January but got delayed due to the Covid-19 pandemic.