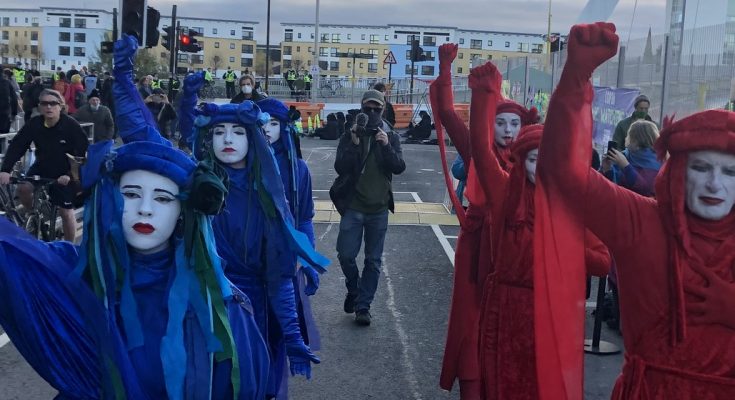 This year saw another steady stream of UN-backed reports reinforcing a stark message: man-made climate change is an urgent and even existential threat to life on Earth. Will the international community’s efforts to tackle the crisis, as seen at the COP26 UN Climate Conference, result in meaningful action?

To avoid catastrophic climate change, global temperature rises need to be kept to a maximum of 1.5 degrees above pre-industrial levels, but the odds of the world getting hotter in the next five years continue to increase.

The World Meteorological Organisation’s (WMO) flagship State of the Global Climate report warned in April that the global average temperature had already risen by about 1.2 degrees, and a UN Environment study in October revealed that, unless commitments to cut harmful greenhouse gas emissions are not improved, the world is on track to warm by 2.7 degrees this century.

Several more reports from UN agencies showed that greenhouse gas concentrations are at record levels and that the planet is on a path towards dangerous overheating, with worrying repercussions likely for current and future generations.

The consequences of climate change, include more frequent extreme weather events, and there were many more of them this year, such as the catastrophic flooding in several western European countries that led to several deaths in July, and devastating wildfires in Mediterranean countries and Russia, in August.

Data from the WMO shows that, over the past few decades, the surge in natural disasters has disproportionately affected poorer countries and, last year, contributed to mounting food insecurity, poverty and displacement in Africa.

With most of its land only a few feet above sea level, Kiribati is seeing growing damage from storms and flooding. Image credit: © UNICEF/Vlad Sokhin

Paradoxically, the countries suffering most from the climate crisis are also those that are least responsible for creating it, a point made with increasing stridency governments and activists, who have helped to push the topic of adaptation higher up the agenda.

Adaptation is a key pillar of the 2015 Paris Agreement on Climate Change. It aims to reduce different countries and communities’ vulnerability to climate change by increasing their ability to absorb impacts.

However, with time running out for some, particularly Small Island Developing States which risk being submerged by rising sea levels, a gulf in the financing needed to protect them remains.

A key UN Environment (UNEP) report in November pointed out that even if countries were to turn the emissions tap off today, climate impacts would remain, for decades to come. “We need a step-change in adaptation ambition for funding and implementation to significantly reduce damages and losses from climate change,” said UNEP chief Inger Andersen. “And we need it now.”  https://www.youtube.com/embed/dxN0APiIUVc?rel=0&enablejsapi=1&origin=https%3A%2F%2Fnews.un.org

We also need to speed up the worldwide transition to cleaner forms of energy and end the use of coal, if we are to stand a chance of limiting temperature rises.

Progress on this front remains sketchy, however: under current plans, governments will continue to produce energy from fossil-fuel sources in quantities that will lead to more warming, despite improved climate commitments.

Over the next two decades, governments are projecting an increase in global oil and gas production and only a modest decrease in coal production. Taken together, these plans mean that fossil fuel production will increase overall, at least until 2040.

These findings were laid out in the latest UN Production Gap report, which included profiles for 15 major fossil fuel-producing countries, showing that most will continue to support fossil fuel production growth.

In a bid to change this trajectory, the UN held a High-Level Dialogue on Energy, the first of its kind in 40 years. National governments committed to providing electricity to over 166 million people worldwide, and private companies pledged to reach just over 200 million.

Governments also committed to installing an additional 698 gigawatts of renewable energy from solar, wind, geothermal, hydro, and renewables-based hydrogen, and businesses, notably power utilities, pledged to install an additional 823 GW, all by 2030.

The increasing incidents of extreme weather is a clear sign that the natural world is reacting to man-made climate change but working with nature is touted as being one of the best ways to restore balance.

This will require a lot of investment, and an overhaul of the way we interact with the natural world.

The UN has estimated that an area of land roughly the size of China will need to restore to its natural state if the planet’s biodiversity and the communities who rely on it are to be protected, and annual investments in nature-based solutions to the crisis will have to triple by 2030 and increase four-fold by 2050 if the world is to successfully tackle the triple threat of climate, biodiversity and land degradation.

Meanwhile, with more than a million species at risk of extinction, UN chief António Guterres called on countries to work together to ensure a sustainable future for people and the planet, as the first part of the UN Biodiversity Conference opened in October (the second part is scheduled to take place in Spring 2022).

The conference will develop a global roadmap for the conservation, protection, restoration, and sustainable management of biodiversity and ecosystems for the next decade.

Show me the money

From renewable energy to electric transport, reforestation, and lifestyle changes, there are countless solutions to tackling the climate crisis, which many believe is the existential threat of our times. However, it is still not entirely clear where the money will come from to pay for it all.

More than a decade ago, developed countries committed to jointly mobilize $100 billion per year by 2020 in support of climate action in developing countries. However, the figure has never been met.

Nevertheless, the business world seems to be waking up to the fact that climate investments make economic sense. In most countries, for example, going solar is now cheaper than building new coal power plants, and clean energy investments could create 18 million jobs by 2030.

In October, 30 CEOs and senior business leaders of major companies, collectively worth some $16 trillion, attended a meeting of the Global Investors for Sustainable Development (GISD) Alliance, to develop guidelines and products that align the existing finance and investment ecosystem, with the Sustainable Development Goals (SDGs).

Since its creation, the GISD Alliance has developed standards and tools aimed at moving trillions of dollars to finance a more sustainable world.

This year, GISD published its latest tool to accurately measure the impact of companies on sustainable development targets and provide investors with key insights. The group is now creating funds that will create real-life opportunities to finance the Goals.

Promising the Earth at COP26

The centerpiece climate change event of the year, at least in terms of its profile in the media and amongst the general public, was the COP26 UN Climate Conference, held in Glasgow in November.

The intensive two-week event was convened to move on definitively from the promises made at the Paris Agreement adopted at the 2015 Conference, and actually, work out the detail of turning these commitments into concrete action.

There had been many warnings ahead of COP26 that the conference would not deliver the desired results, and there were huge demonstrations in Glasgow – witnessed by our UN News team on the ground – and around the world, from people of all ages demanding more action from governments.

Some COP veterans, however, sensed a different atmosphere from previous conferences, with more positivity, and a sense that something tangible could be achieved, and the early days of the event saw a major pledge to restore the world’s forests, along with a list of commitments from public and private sector actors to combat climate change, curb biodiversity destruction and hunger, and to protect indigenous peoples’ rights.

A potential answer to the question of climate finance seemed to come on ‘finance day’, with the announcement that nearly 500 global financial services firms had agreed to align $130 trillion – some 40 percent of the world’s financial assets – with the climate goals set out in the Paris Agreement, including limiting global warming to 1.5 degrees Celsius.

However, many world leaders were left disappointed by finance negotiations held in Glasgow.

Bhutan, representing the group of Least Developed Countries (LDC) lamented that public statements made by countries often differ from what is heard at the negotiations.

“We came to Glasgow with high expectations. We need strong commitments to ensure the survival of the billion people living in the LDCs in the future”, said the country’s representative on ‘adaptation day’.

On ‘energy day’, the Global Clean Power Transition Statement was announced, a commitment to end coal investments, scale-up clean power, make a just transition, and phase out coal by the 2030s in major economies, and in the 2040´s elsewhere.

Some 77 countries, including 46 countries such as Poland, Vietnam, and Chile, 23 of which are making commitments on ending coal for the first time, are members. However, the biggest coal financiers (China, Japan, and Republic of Korea) did not join.

The final agreement of COP26 was not without heartbreak and drama. At the last, much delayed, plenary session, chairperson Alok Sharma was moved to tears by the tense negotiations when a seemingly last-minute intervention by India adjusted the wording related to fossil fuels, to the fury of some countries.

However, the agreement was notable for the inclusion, for the first time ever at a COP, of those two words – fossil fuels – which the nations of the world agreed to “phase down” (rather than the original “phase out”, to the chagrin of Mr. Sharma, and many delegates).

Whilst some commentators believe that the agreement did not go far enough to save the world from a climate-related catastrophe, others saw hope in the spirit in which the negotiations took place, and the possibility that each subsequent COP will see tangible, and worthwhile steps towards a sustainable future for people and the planet.

“I know you are disappointed. But the path of progress is not always a straight line, ”said the UN SecretaryGeneral, in response to the deal. “Sometimes there are detours. Sometimes there are ditches. But I know we can get there. We are in the fight of our lives, and this fight must be won. Never give up. Never retreat. Keep pushing forward”.