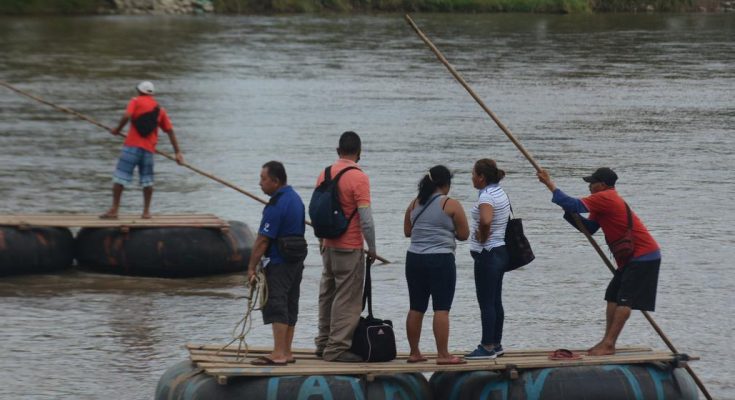 Image: A group of people crosses the Suchiate River on a raft, crossing the border between Guatemala and Mexico, in November 2021. Image credit: NIC Mexico/ Luis Arroyo

Mexico/For several years, the number of people transiting through Mexico, many hoping for a better life in the USA, has continued to grow. The UN team in the country, in close collaboration with the Mexican authorities, is working to ensure that they receive essential, and often life-saving, assistance.

When life in her country became too dangerous, Natalia* took her children and fled. She managed to cross into Mexico via the southern border, but once she arrived in the country, she had no means of providing for herself and her family.

Her story is similar to those of many other desperate people who head to Mexico, increasingly seen as a country of transit and asylum: In 2014, 2,100 people arrived in the country to request refugee status; five years later, in 2019, that had risen to more than 70,000.

The figures dropped in 2020, as travel restrictions imposed as a result of the COVID-19 pandemic slowed global migration but, between January and November 2021, the country received more than 123,000 asylum requests from people coming from the Caribbean, Central American, and South American countries (Haiti, Honduras, Cuba, El Salvador, Chile, Venezuela, Guatemala, Nicaragua, Brazil, and Colombia).

Natalia and her children are now being supported by the UN refugee agency, (UNHCR), which has found them a safe place to live, and psychological aid. Many others in a similar situation are being supported with life-saving information and other kinds of assistance at the shelters and institutions that work together with UN agencies in Mexico.

A build up on the border

As of July 2021, 70 percent of asylum requests were concentrated in the border town of Chiapas, which receives daily flights of people expelled from the United States under Title 42 legislation (a public health order issued in March 2020 by the Trump administration, which justifies the expulsions on the grounds that there is a communicable disease, namely COVID-19, in the migrant’s country of origin).

Here, the close coordination of the UN agencies with the Mexican authorities is an important element in ensuring that people on the move are able to integrate well with the local host communities and that they are able to prevent discrimination, xenophobia, and other forms of rejection.

*Not her real name

The UN System in Mexico