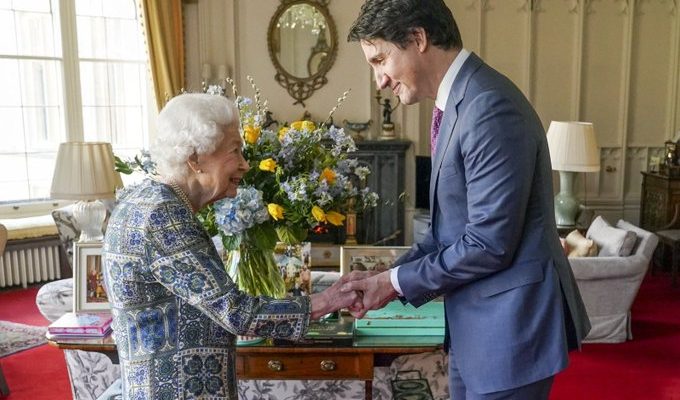 Trudeau is in Britain to discuss the international response to Russia’s invasion of Ukraine with Prime Minister Boris Johnson and Dutch counterpart Mark Rutte.

In her first in-person engagement since catching COVID-19, the Queen dispensed with her walking stick to greet Canadian Prime Minister Justin Trudeau.

Trudeau later reportedly said the Queen was very interested in what was going on with regard to Russia.

“I can tell you in my conversation with her this morning, she was as insightful and perspicacious as ever, very interested in what’s going on,” he told a news conference in London.

The flowers behind her in official photographs were blue and yellow, the colors of the Ukrainian flag, which Royal watchers said was a deliberate tribute.

The Queen and Trudeau were photographed with a large arrangement of striking blue and yellow flowers between them showing Trudeau holding the queen’s hand in his while also chatting and laughing.

The palace had announced on Feb. 20 that the 95-year old queen had tested positive for COVID-19, two weeks after she marked 70 years on the British throne.

She reportedly was suffering from mild cold-like symptoms and canceled several engagements but continued to carry out light duties.

A “generous” private donation was made by the Queen to help Ukrainian refugees fleeing war.