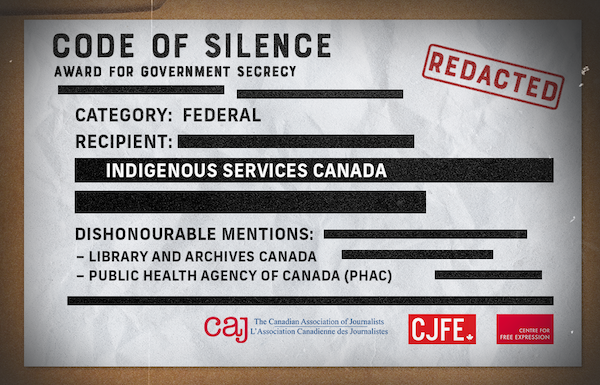 Ottawa/CMEDIA: The 2021 Code of Silence Award for Outstanding Achievement in Government Secrecy in the federal category goes to the Indigenous Services Canada (ISC), Canadian Association of Journalists (CAJ) reports said.

Recognized for its ongoing failure to provide details surrounding test results of drinking water in many Indigenous communities. ISC has also failed to comply with contracts negotiated with private water companies requested under Canada’s federal Access to Information Act.

ISC has also failed to respond to numerous requests and questions over the past several years about why it has taken so long for records to be released and, even when any are, they are heavily redacted.

The nomination package for ISC noted how the department has consistently been citing the principle of Ownership, Control, Access and Possession (OCAP) as the reason for withholding records.

Besides ISC, two other federal departments, the Public Health Agency of Canada (PHAC), and Library and Archives Canada (LAC) have been served with dishonorable mentions in this year’s competition for their efforts to obstruct and complicate.

PHAC has taken an extension of 1,950 days (more than five years) for a request for one week’s worth of emails and texts sent and received in June 2021 by Iain Stewart, the agency’s then-president, and LAC for its huge delays in completing requests made under the Access to Information Act. The institution has made cuts that have left its archival reading room open just three days per week.

As a result of this change, Canadians will know less about the history of their country at a time when they are trying to come to grips with painful and important episodes of the past in order to build a better future.

The Code of Silence Awards is presented annually by The Canadian Association of Journalists, the Centre for Free Expression at Ryerson University (CFE), and Canadian Journalists for Free Expression (CJFE). The intent of the awards is to call public attention to the government or publicly funded agencies that work hard to hide information to which the public has a right under access to information legislation.

Federal Cabinet, Environment and Climate Change Canada, and The Treasury Board of Canada are the recent winners in the federal category.

The Code of Silence Award recipients in the provincial, municipal and law enforcement categories will be announced each Tuesday over the course of this month.