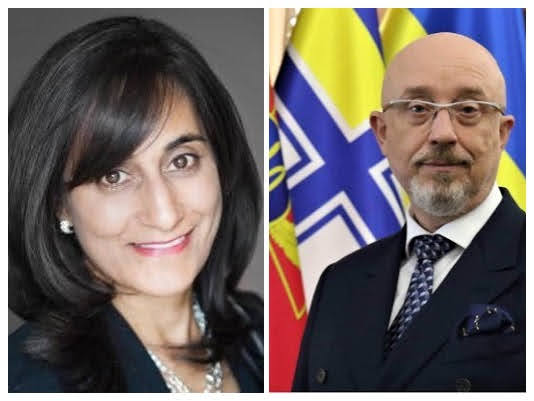 She re-affirmed Canada’s strong commitment to Ukraine during her two-day visit and met with several of her Ukrainian counterparts and members of the Canadian Armed Forces deployed on Operation UNIFIER.

The discussions by the ministers included the recently announced extension and expansion of Operation UNIFIER, the Canadian Armed Forces’ (CAF) military training and capacity-building mission in Ukraine.

Canada’s steadfast support of the Ukrainian people in the face of Russian aggression and intimidation and commitment to finding peaceful ways to advance democracy and stability were also reiterated by Minister Anand.

Canada’s continued military and diplomatic efforts in support of Ukraine were deeply appreciated by Minister Reznikov.

While in Kyiv, Minister Anand also spoke with the Secretary of the National Security and Defense Council of Ukraine, Oleksiy Danilov, and the Minister of Internal Affairs, Denys Monastyrsky.

Besides discussing the ongoing security challenges facing Ukrainians, and Canada’s commitment to helping Ukraine strengthen its ability to defend itself against a range of threats, they also underscored the importance of collective security in preserving global peace and security and the rules-based international order. The minister also had the opportunity to meet with members of the CAF deployed on Operation UNIFIER, and personally thanked them for their significant contributions in support of the security forces of Ukraine.

She emphasized the important role the CAF’s work plays in helping to enhance these forces as a whole.

Minister Anand’s next trip will be to Brussels to meet the Secretary-General of the North Atlantic Treaty Organization, Jens Stoltenberg with her intention to reaffirm Canada’s commitment to transatlantic security and emphasize the importance of strengthening cooperation with our European allies and partners to build a safer and more secure world.

Afterward, Anand will travel to Latvia to meet with her counterparts and CAF personnel deployed on Operation REASSURANCE, and reaffirm Canada’s commitment to the security and stability of Central and Eastern Europe.