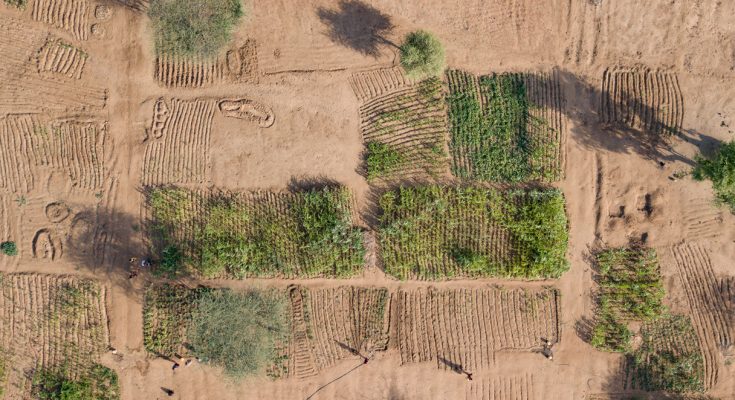 Efforts to restore land and soil productivity could be beneficial for farms, such as these in Kenya, a new report concludes.UNITED NATIONS CONVENTION TO COMBAT DESERTIFICATION

The Global Land Outlook 2 from the United Nations Convention to Combat Desertification (UNCCD) points out that 40% of Earth’s land has been compromised by development, deforestation, farming, and other human activities. But the report also offers a vision of benefits that could accrue by 2050 if humanity acts to restore landscapes and reverse this toll.

The report—a follow-up to a similar analysis released in 2017—stands out for several reasons, says ecologist Robin Chazdon, who runs a consulting company called Forestoration International and was not involved in the work. One is that it takes a synthetic, holistic view of a number of related problems, including protecting biodiversity, promoting sustainable farming and land use, and curbing climate change. Currently, nations are taking on each of those issues with separate agreements and action plans, but “What emerges from this report is the need to unite all these into a single strategy,” Chazdon says.

The report also embraces an unusually broad definition of restoration, she notes. Although the term is often used to refer to efforts to return landscapes to some undisturbed state, the report says restoration should also encompass more limited steps. These include replacing a depleted soil’s nutrients and microbes to enable it to better support crops or grazing animals, as well as removing invasive species and helping damaged forests and grasslands regrow. “It means anything you do, if you pull a weed out of your lawn, you are doing ecosystem restoration,” Chazdon explains.

Some researchers, however, take issue with the report’s inclusive definition of restoration, saying it is too focused on human needs. “It’s too anthropocentric, completely missing what land restoration means,” says restoration ecologist David Moreno Mateos of Harvard University. “This is not about people, this is about the complex system that Earth is.” He is also concerned that the report doesn’t acknowledge that true ecosystem restoration can often take a century or more.

The report, however, describes a range of ongoing restoration efforts, such as Africa’s Great Green Wall tree planting project, and it notes that countries have already pledged to restore 1 billion hectares of land by 2030. That’s a great starting point, one of the authors says. “When I started compiling [the pledges], I didn’t think it was anything close to 1 billion,” says Barron Orr, lead scientist at UNCCD.

The report paints a worrying picture of what could happen by 2050 if humanity fails to protect and restore landscapes. Those outcomes include:

In contrast, the report finds that the benefits could be substantial if nations can restore 5 billion hectares of land in the coming decades. They include:

The report paints an even more optimistic scenario if nations could, in addition to restoring 5 billion hectares of land, protect areas equal to half of Earth’s land surface that are important for preserving biodiversity, maintaining water flows, and providing other benefits. Meeting that goal would require increasing crop yields by at least 9%, the report notes, but the results could include:

Some researchers caution against expecting too much from land restoration efforts. “The report provides a comprehensive and very interesting overview of the political, social, and ecological aspects that affect degradation, recovery, and sustainability in land use globally,” says Marcia Marques, an ecologist at the Federal University of Paraná, Curitiba, who was not involved in it. But although restoration “promotes great local and regional gains, there is still no compelling evidence that large-scale restoration will be enough to sequester carbon from the atmosphere and mitigate climate change.”