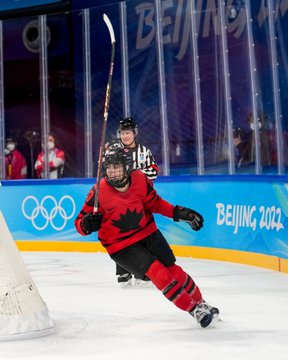 Beijing (China)/CMEDIA: In her first Olympics, the 21-year-old Georgetown, Ont., native, Canada Sarah Fillier is quickly proving she truly belongs to the Canadian women’s hockey team when she stormed past Finland with an 11-1 victory on Saturday at the Wukesong Sports Centre in Beijing.

For the second straight game, Fillier got the scoring started for the Canadians as part of a two-goal performance.

Ahead of the Olympic women’s hockey tournament, Finland was expected to test Canada in a meeting with defending champion United States. But Canada’s relentless speed and pressure produced an 11-1 win for the Canadians on Saturday in Beijing.

On Monday Canada meets Russia and on Tuesday with the United States to cap the preliminary round.