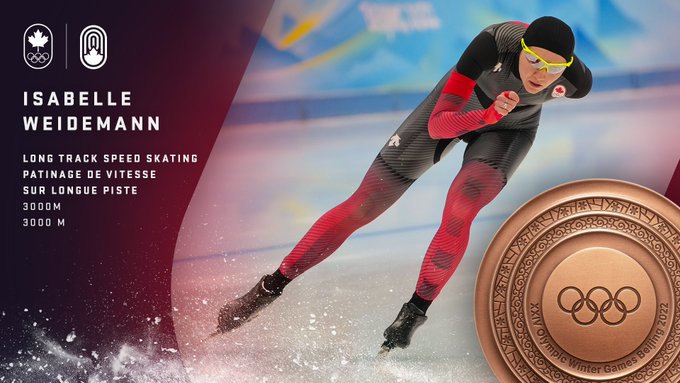 Beijing/CMEDIA: The 26-year-old Isabelle Weidemann from Ottawa becomes the first Canadian woman since 2010 to climb the podium in long-track winning Canada’s first medal of the Beijing Olympics

Weidemann earned bronze in the women’s 3,000 meters with a time of three minutes 58.64 seconds on Saturday in China.

Four years since she narrowly missed the podium in Pyeongchang, with countless monotonous turns of the oval in between, the hard work had paid off.

Being part of the Canadian foursome who finished a heartbreaking fourth in the team pursuit in Pyeongchang, Weidemann raced like the hunter in her pairing with Norway’s Ragne Wiklund on Saturday night.

Preserving her speed for a fast finish. she powered around to finish in three minutes 58.64 seconds at the Ice Ribbon oval and was victorious.

Weidemann’s brother Jake is a member of Canada’s next-generation speed skating team. The family relocated to Calgary to help the siblings pursue their Olympic dreams.

“This is Isabelle Weidemann’s first Olympic medal in her second Olympic Winter Games appearance. Canadians from coast to coast to coast are immensely proud of your performance, Isabelle Weidemann. Through your performance, you showed confidence, discipline, and a commitment to excellence. You are a role model for all of us, especially our youth. I know Canadians all across the country are supporting you.

It feels great to celebrate such an amazing accomplishment! I am confident that more medals will be won. Let’s cheer on our athletes as they proudly represent our country! Go Canada!,” Pascale St-Onge, Minister of Sport and Minister responsible for the Economic Development Agency of Canada for the Regions of Quebec said in a statement.