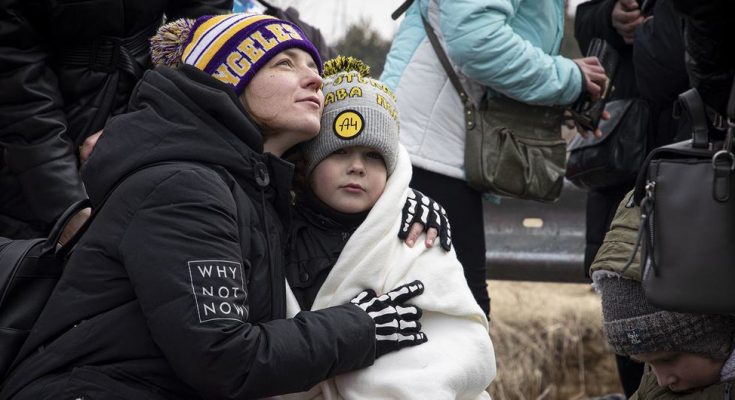 Almost one child per second in Ukraine is becoming a refugee of the war, UN humanitarians said on Tuesday, as the total number of people who have now fled the country since the Russian invasion began, passed three million.

“We have now reached the three million mark in terms of movements of people out of Ukraine to neighboring countries. And among these people there are some 157,000 third-country nationals,” said Paul Dillon, spokesperson for the International Organization for Migration (IOM), speaking in Geneva.

Some 1.5 million children have now joined the exodus from Ukraine, at a rate of just under one per second, since the Russian invasion began on 24 February.

“Every day, over the past 20 days, in Ukraine more than 70,000 children have become refugees. That’s every minute, 55 children fleeing the country,” said James Elder, spokesperson for the UN Children’s Fund (UNICEF).

Highlighting that nine in 10 of those fleeing unrelenting violence in Ukraine are women and children, Mr. Elder warned that youngsters are prey to traffickers, as they arrive in unfamiliar new surroundings.

“To give a sense of the border that I used to visit – the main border, Medyka,  Poland to Ukraine – it is scores of people standing around buses and minivans calling out names of capital cities – or at least it was a week ago – people getting onto those,” he said. “The vast, vast majority of course are people with wonderful intentions and great generosity, but there is no doubt given what we understand of trafficking in Europe, that that remains a very, very grave issue.”

The development follows a warning from the UN Secretary-General, who on Monday said that Russia’s military offensive against civilians was “reaching terrifying proportions”.

In Mariupol, humanitarians warned that the situation in the port city has deteriorated further, after further heavy Russian bombardment.

Hundreds of thousands of people are being “suffocated” by a lack of supplies and are unable to flee the city, besieged by Russian forces.
The International Committee of the Red Cross (ICRC) on Tuesday described the situation as “dire and desperate”.

“The bottom line here is that hundreds of thousands of people remain without aid today,” said spokesperson Ewan Watson. “They are unable to leave the city today and they are essentially being suffocated in this city right now with no aid.”

Mr. Watson also confirmed that “some vehicles …were able to leave the city yesterday. The ICRC was not involved in that evacuation of people. But what I would say is that is really a drop in the ocean.”

Amid reports that families are being forced to gather water from streams and that fights have broken out over food, Mr. Watson urged the Ukrainian and Russian authorities to find a solution so that aid can reach the city’s people.

The ICRC spokesperson also announced that the Organization intended to evacuate people from the besieged northeastern city of Sumy on Tuesday, using 30 buses.

© UNICEF/Viktor MoskaliukLviv’s children’s hospital is catering to sick children, including children with cancer, who have have fled other regions in the country, seeking safety and treatment.

Across the country, UN humanitarians are delivering lifesaving aid where they have access. But UNICEF’s Mr. Elder reported “indiscriminate attacks time and again on critical infrastructure, particularly water has been targeted.

“Anecdotally from those colleagues there, we know of families who are undoing all heaters to take water coolant out as a last resort, as something to drink.”