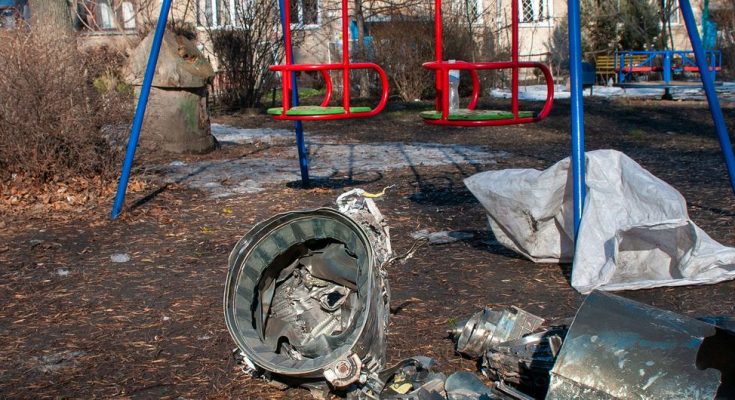 On 25 February 2022, spent pieces of a rocket lie next to a playground, with military operations ongoing in Kyiv, Ukraine. Image credit: © UNICEF/Andrii Marienko/UNIAN

Rockets have been “raining down” on Ukraine’s cities and hundreds of people have been killed or injured since the Russian military offensive began, the UN Secretary-General said on Tuesday, at the launch of a $1.7 billion flash appeal to provide urgently-needed assistance.

“United Nations agencies and our partners are now working 24-7 to assess humanitarian needs and scale up aid, particularly to women, children, older people and those with disabilities,” Mr. Guterres said, before thanking the Member States that have kept their borders open to people fleeing the violence.

“We must help Ukrainians help each other through this terrible time,” the UN chief insisted, adding that electricity and water supplies have been disrupted, roads have been “damaged or destroyed by bombs” and food and medicine were in short supply in some areas.

In Geneva, UN emergency relief chief Martin Griffiths, explained that the purpose of the call for immediate humanitarian funding was to help people inside Ukraine – including those internally displaced – as well as those seeking shelter beyond its borders.

An estimated $1.1 billion is needed for the response inside Ukraine for three months, to help six million of the most vulnerable in Ukraine, as the escalating conflict has triggered an immediate and steep rise in demand for lifesaving aid. But essential supplies and services are being disrupted, as civilians flee for their lives.

At the end of the launch event in Geneva, Mr. Griffiths announced that $1.5 billion had been pledged for the humanitarian appeals. The UN Spokesperson, Stephane Dujarric, welcomed the “outpouring of support” speaking to journalists in New York shortly afterward.

“This is among the fastest and most generous responses a humanitarian flash appeal has ever received“, he said.

Also, briefing journalists, High Commissioner for Refugees, Filippo Grandi, appealed for “$550 million for the refugee agency and 12 partner agencies”. Noting that 520,000 people were estimated to have been displaced by the Ukraine crisis just last night, Mr. Grandi said that this had already risen sharply, in the space of just a few hours: “677,000 refugees have now fled Ukraine to neighboring countries in the past six days,” he said. “That is 150,000 more, in less than 24 hours.”

The UN estimates that 12 million people inside Ukraine will need relief and protection, while more than four million refugees may need protection and assistance in neighboring countries in the coming months.

© UNICEF/Viktor MoskaliukOn 27 February 2022, as military operations continue, people, fleeing Ukraine walk along vehicles lining up to cross the border from Ukraine into Poland.

Reacting to reports that third-country refugees have been ill-treated at border crossings and inside Ukraine as they try to seek shelter, the UN refugee chief insisted that “there should be absolutely no discrimination between Ukrainians and non-Ukrainians. Europeans and non-Europeans. Everybody is fleeing from the same risks.”

While the European Union is discussing the possibility of giving temporary protection status to refugees from Ukraine, the tragedy is “likely to introduce a new dimension to the many years of debate on asylum status, responsibility sharing and so forth”, said Mr. Grandi.

The UN refugee agency, UNHCR, has already received more than $40 million in private contributions from individuals or companies, an “unprecedented” feat, he added. “I’ve never seen it and I think it’s positive.