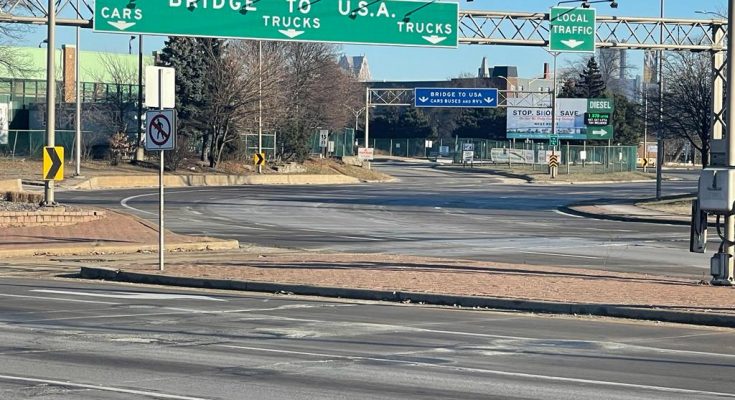 Ambassador Bridge to the US. Image credit: IBNS Canada

The Liberal government announced to the Canadian truckers in November itself, well in advance that all Canadian truckers looking to cross the border from the United States would need to be vaccinated in order to avoid a 14-day quarantine, a policy that came into effect last Saturday.

Fearing further potential damage to an already crimped supply chain, the Canadian Trucking Alliance (CTA) over the past two months had been urging the federal government to keep the industry exempt from cross-border vaccine rules, strongly urged that Ottawa should stay out of their way or to delay them until 2023

According to the reports of CTC and the American Trucking Associations (ATA), up to 26,000 of the 160,000 drivers who make regular trips across the Canada-U.S. border would likely be sidelined as a result of the vaccine mandate in both countries.

The public opinion is overwhelmingly in favor of strong vaccine requirements for essential workers, said Andrew Steele, a vice-president at consulting firm StrategyCorp’s polls, said that companies and trade groups need to align with public opinion.

Trade groups say that while several trucking companies have 100 percent vaccination rates and offer bonuses to workers who get jabbed, the majority of fleets do not require inoculation.

Laurel Lennox, the spokeswoman for Transport Minister Omar Alghabra, said the industry has been encouraging vaccinations.

“The biggest threat to supply chains is COVID — and our best tool is vaccines,” she said in an email.

“The volume of cross-border truck traffic after the mandate was applied has not varied significantly,” she said.