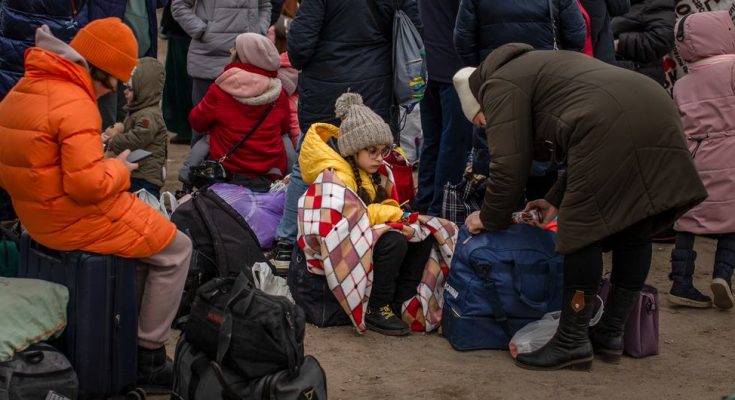 Ukrainian refugees, some with children, arrive at the Palanca border crossing in Moldova. © UNICEF/Siegfried Modola

CMEDIA: As the total number of forced to flee their homes in Ukraine rises above 10 million, attacks on healthcare facilities there due to Russia’s continuing bombardment are averaging more than two per day, the UN warned on Monday.

“We, along with our partners, remain deeply concerned over the impact of reported fighting on civilians trapped in cities in eastern, northeastern and southern Ukraine, including in Chernihiv, Sumy, Kharkiv, Izyum, Donetsk, Mykolaiv, and Mariupol”, said UN Spokesperson, Stéphane Dujarric, briefing correspondents at UN Headquarters in New York.

Since 24 February when the invasion began, more than 10 million people have now been forced from their homes in search of safety and security – nearly a quarter of the population of Ukraine.

This includes an estimated 6.5 million men, women, and children who are internally displaced, said UN migration agency, IOM, on Monday, and nearly 3.5 million people who have crossed international borders out of Ukraine as refugees, according to UN refugee agency, UNHCR.

IOM’s data show that 13.5 percent of those newly displaced had already had prior experience with displacement during 2014 and 2015 when Russia’s military annexed the Crimea from Ukraine and backed separatist militants in the eastern regions of Luhansk and Dontetsk.

“Many of those displaced are particularly vulnerable, pregnant and breastfeeding women, elderly persons, those with disabilities, chronic illnesses and people directly affected by violence”, reported IOM. More than 60 percent of heads of households surveyed are accompanied by children, and more than 53 percent of internally displaced people are women.

The agency said the most pressing needs include medicines, health services and financial resources. Some 186,000 of the displaced are third country nationals.

“Responding to the needs of those internally displaced and stranded within Ukraine is our top priority. Our teams have been reaching thousands of people with essential aid, but we need hostilities to cease, in order to be able to reach people in severely affected areas.”

Humanitarian organizations are concerned about the risk of trafficking and sexual exploitation and IOM has scaled up its trafficking prevention measures, providing verified and safe information to refugees and third-country nationals on the move.

Healthcare in the cross hairs

The World Health Organization says it has verified six additional reports of attacks on healthcare facilities in Ukraine on Sunday, Mr. Dujarric said.

“As of 20 March, WHO has verified 52 attacks on health care in 25 days. WHO notes that this is more than 2 attacks per day, stressing that this, of course, is unacceptable and that health care must always be protected”, added the UN Spokesperson.

World Food Programme, WFP, reported that it has reached more than 330,000 crisis-affected people inside Ukraine with food assistance, since the Russian offensive began.

Food delivery to cooperating partners is also being scaled up, reaching more than 900 metric tons over the last days. In besieged Kharkiv, which has suffered huge damage from Russian heavy weaponry, WFP has doubled its bread distribution through partners, reaching nearly 78 metric tons for about 260,000 people.

In Kyiv – following the delivery of 26 metric tons of high-energy biscuits – WFP’s partners have delivered about 325 metric tons of vegetable oil and 478 metric tons of wheat flour to nearly 70,000 vulnerable people, Mr. Dujarric said, while in Dnipro, some 2.2 metric tons of mixed canned food was also distributed to the most vulnerable.

At Ukraine’s stricken Chernobyl nuclear plant, staff that has been working there non-stop since the invasion began, have finally been allowed to return home by the Russian military officers who now control the plant, making way for a fresh team.

The development on Monday followed deep concern expressed over staff welfare there, by Mario Grossi, head of the UN atomic energy agency, IAEA.

In a statement on Sunday, Mr. Grossi said that they’d been carrying out their important work “under immensely stressful and tiring conditions in the presence of foreign military forces and without proper rest”.