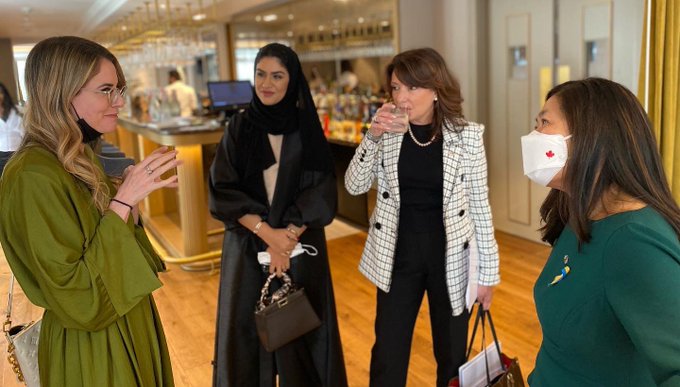 While working with a mission to grow and strengthen Canada’s trade relationships abroad, Minister Ng condemned in the strongest terms President Putin’s unprovoked and unjustifiable invasion of Ukraine as a direct challenge to the rules-based international order. She also reaffirmed that Canada stands resolute against authoritarianism and with a free and democratic Ukraine, now and in the future.

“Strengthening Canada’s trade relations with key partners is crucial to driving a strong, inclusive, and sustainable economic recovery…that will benefit Canadian businesses and exporters while promoting Canadian values…and expand into new markets around the world, creating economic growth and jobs in the process,” said Minister Ng today in a news release.

In India, Minister Ng joined India’s Minister of Commerce and Industry, Consumer Affairs and Food and Public Distribution and Textiles, Piyush Goyal to discuss Trade and Investment. Relaunch negotiations towards a Canada-India Comprehensive Economic Partnership Agreement were jointly announced by both the ministers to give Canadian businesses greater access to India’s fast-growing market of 1.4 billion consumers.

They also announced that work towards a Canada-India Early Progress Trade Agreement as the first deliverable. Minister Ng and Minister Goyal also met with other government and business leaders to advance Canada-India trade relations and discussed opportunities to support job creation and economic growth.

Following significant advocacy in recent months, Minister Ng also announced India’s agreement to the import of Canadian pulses without fumigation penalties, until the finalization of a systems approach for Canadian pulses. This would not only mean fewer costs for Canadian pulse farmers and exporters but also more predictability and opportunity in the Indian market.

She also advocated for greater access to Canadian cherries and lumber exports.

In her meeting in Israel with Orna Barbivai, Israel’s Minister of Economy and Industry Minister Ng discussed new partnerships between Canadian and Israeli companies which were made possible by cooperation between Canada and Israel on supporting gender equality and women’s economic empowerment as well as the Canada-Israel Free Trade Agreement (CIFTA).

In her meeting with Israel’s Minister of Innovation, Science, and Technology, Orit Farkash-Hacohen, Minister Ng announced a partnership for a refreshed Canada-Israel science, technology, and innovation .

In the West Bank, Minister Ng met participated with Palestinian Prime Minister Dr. Mohammad Shtayyeh in a roundtable with female Palestinian leaders in business, economy, and trade, where learned about the opportunities and challenges of their work in the West Bank and Gaza. Applauding their innovation and leadership in the community, Minister Ng discussed how Canadian-Palestinian trade can be strengthened.

In her meeting at the United Arab Emirates (UAE) Ng met with senior Emirati Government and business leaders to create opportunities through trade, including during the Canada Arab Business Council’s (CABC) Canada-Arab Business Forum.

Minister Ng also met with the Minister of Economy, Abdulla bin Touq Al-Marri and discussed Canada-UAE commercial relations, negotiated a Foreign Investment Promotion and Protection Agreement (FIPA), while supporting SMEs to start-up, scale-up, and thrive in both countries and around the world.

Finally, she and the Governor-General launched Canada Day at Expo 2020.

Trade can be a force of positive change, said Mary Ng which underlined greater economic engagement with partners and provides opportunities to promote Canadian values, such as human rights, democracy, and mutual, inclusive economic development.

She also affirmed that support for minorities and underrepresented groups including religious minorities, ethnic minorities, and LGBTQ2S+ communities as well as respect for human rights lies at the heart of Canada’s trade policies.