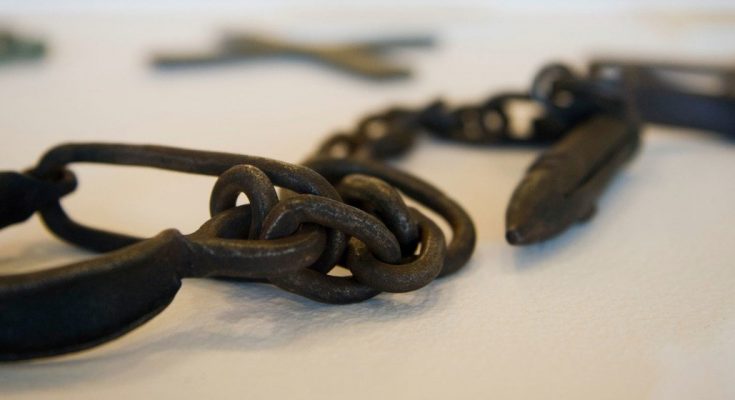 New York Times writer Nikole Hannah-Jones, best known for the 1619 Project, which frames slavery as one of the core elements of the history of the United States, addressed the UN General Assembly during a commemoration of the transatlantic slave trade on Tuesday. She explained to UN News how the Project came about.

Nikole Hannah-Jones The 1619 Project is a book that commemorates the 400th anniversary of the first ship that brought the first Africans to the British colony of Virginia. We mark that as the real beginning of American slavery in the original 13 colonies that would form the United States.

And what the project tries to do, through a series of essays, is to enter slavery as a foundational American institution and to place the contributions of black Americans really at the center of the American story.

But more than that, to also show the way that the 250-year legacy of slavery in the United States still shapes so much of our society today. It’s not just about the past, but it’s about what has happened right now.

Hannah-Jones, Pulitzer Prize-winning reporter for The New York Times Magazine and creator of the 1619 Project, addresses the UN General Assembly commemorative meeting marking the International Day of Remembrance of the Victims of Slavery and the Transatlantic Slave Trade. Credit: UN Photo/Manuel Elías

UN News What would you tell those who say “I didn’t participate in slavery, why should you still be telling me about slavery”?

Nikole Hannah-Jones The first thing I would say is that it is illogical to believe that a system that lasted for 400 years, reshaped the complexion of the world, enriched the European colonial powers, that laid the foundation for the economic prosperity of the United States, somehow does not shape the society that we live in any longer.

For instance, in the United States, we’ve had slavery longer than we had freedom, and African descended people remain at the bottom of all indicators of well-being and all of the former slave societies.

None of us were alive when the Constitution was written. And yet we understand that that is our legacy. You cannot only claim the parts of your history that you think makes you look good or that you think are uplifting.

UN News Were you surprised by the pushback in some political circles?

The United States in particular has been in a great denial about the institution of slavery and its legacy. We are a nation founded on ideals of God-given liberty.  We believe we are the freest, most exceptional nation in the world. And slavery and its legacy gives lie to that right.https://news.un.org/en/sites/all/themes/bootstrap_un_news/localization/webcast-player2/?videoId=1_lwbon6a0&autoplayparam=0#t=00h00m00s

Slavery is a glaring hypocrisy in a nation that wants to believe that it is the pinnacle of freedom for the world.

But I would be lying if I didn’t say the way the project has been weaponized and politicized, three years after its initial publication, has been actually quite astounding.

And that’s what the 1619 does. It takes the people who have been treated as marginal, it takes the global crime against humanity that was slavery, and says that was just as important to the United States and to the Atlantic world as these ideals of liberty. And that is something that’s very, very scary for certain powerful people.

UN News What is your response to those who say that you are exposing a wound, rather than healing it?

Nikole Hannah-Jones Well, clearly, the wound is still festering. Whether we want to take the bandage off and figure out why or not.

Just two years ago, we had the largest protest for black lives in the history of the world because a black man, George Floyd, was killed by a white police officer, who compressed the oxygen out of this man for eight minutes.

Those who say that if we talk about this, we make it worse, are clearly not the people who are living and suffering under the conditions of this history. I personally believe that light is the best disinfectant that we have, to acknowledge and tell the truth about our history. And then we can begin to repair it.

UN News What would you like Africans to take away from the 1619 Project?

Nikole Hannah-Jones That’s a profound and complicated question because we know that African peoples, particularly in western and Central Africa, also engaged in the slave trade. I think that an acknowledgement of what happened is also necessary on the African continent to move towards reconciliation.

Nothing can be done to change the history. But what we can do is acknowledge what happened and then try to build relationships together.

I think Black Americans would love to be able to have citizenship on the continent and to be able to build these relationships across that that bridge. I think that that reconciliation can be so powerful for all of us.

Fort of Goree Island, Senegal, was the site of one of the earliest European settlements in Western Africa. Credit: Unsplash

UN News During your address to the General Assembly, you highlighted slave resistance and reparations. Why are these pillars critical to moving forward in a constructive way from the legacy of slavery?

Nikole Hannah-Jones I am so grateful that the United Nations is focusing this year on resistance because the way that we are commonly taught this history is that somehow Black people, African people submitted to their enslavement, and this it is used as a justification for slavery.

It also, to me, takes away our humanity, because it is not natural to not fight against slavery. Even the story of abolition is centered around white people in a way that robs us of our agency.

It is not the case that, one day, Britain, which was the greatest slave-trading nation in the world, simply decided “we don’t want to do this anymore because it’s wrong.”  It is the mutinies and the revolt of enslaved people that made it untenable for the British Empire to continue importing Africans into its colonies.

And then when it decided that it couldn’t do it anymore, it also clearly didn’t want other countries to do it, because they would have a competitive advantage. That is how we got to the bans on the international slave trade.

UN News You suggested in your address that this resistance continued well into the Twentieth Century.

There was another migration, not just of immigrants coming to the US, but of Black people in the South.
Six million, the largest migration in the history of the United States, left the South, often under the cover of darkness because they were forced to labor down there, and the white people who were exploiting their labor did not want them to leave.

They decided that they were going to be refugees in their own land, and move to the north to search for a better life and better opportunities.

I feel that, if more people across the globe understood the story of the Great Migration, they would see themselves, their own immigrant story in the story of Black Americans, as opposed to wanting to say, “Why are you not doing better in this country, a great bounty? Why are you not using your opportunity?”

Regarding reparations, I don’t think we can have conversations about one of the greatest crimes against humanity, and not talk about reparations.

I notice that, at the General Assembly, the spokesperson for the Western European countries seemed to prefer to talk about modern-day slavery, which, of course, is a great scourge, and that all of us should be fighting.

It is easier to talk about slavery elsewhere than to deal with that original crime. We must have reparations, and I believe in financial reparations across the Atlantic world. And there’s a separate conversation about reparations for colonialism as well.

And it is not because somehow Black Americans are lazy, don’t want an education, don’t want quality housing, don’t want to work. We know that that is not true. In fact, I don’t understand how the people who were forced to labor for other people can be considered lazy.

Look at Haiti, a place that was forced to pay reparations to White enslavers because they liberated themselves.

And in the United States, the only group of people who ever received reparations for slavery was white enslavers in Washington, D.C.

UN News What should the UN be doing to support the 1619 Project?

Nikole Hannah-Jones I commend the UN as a body for putting out reports on racism in the United States and being willing to challenge the hypocrisy of the country in ways that you don’t often see.

But there certainly has to be more forceful work on the issue of reparations.

There is also an issue regarding representation in the General Assembly. We can look at many of the nations in the Atlantic world that were former slave-holding nations, and we do not see the African diaspora reflected in who gets to be in spaces like this.

I think there is much to do. But I do also believe that the UN has led in some very important areas.

It has been a surreal experience to be here and to be able to address the General Assembly.

I told the story of my grandmother, who had a fourth-grade education, was born on a cotton plantation, and worked as a janitor until she retired, and she could never have imagined that all of her sacrifices would allow me to speak on behalf of our people in our ancestors in this way.

I’m leaving today feeling very grateful, and very honored, and I feel the presence of our ancestors around us.