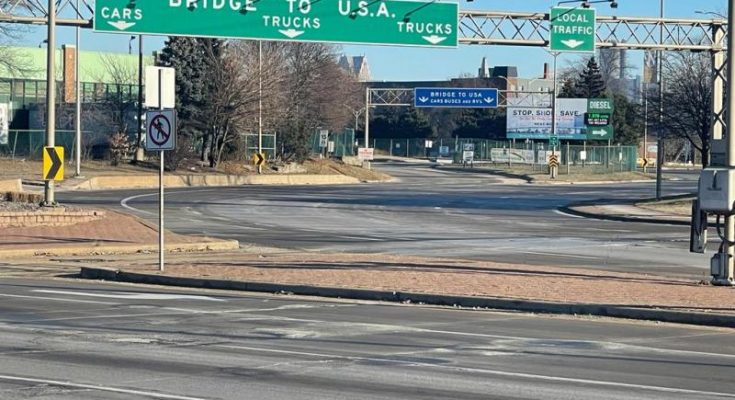 Ambassador Bridge to the US. Image credit: IBNS Canada

Ottawa/CMEDIA: As a protest against the federal vaccine mandate, hundreds of truckers left for Ottawa on Jan 23 from British Columbia, despite the Canadian Trucking Alliance (CTA) urging them to comply with the mandate

The Vaccine mandate went into effect on Jan 15. according to which Canadian truck drivers need to be fully vaccinated, before crossing into Canada if they choose to avoid a two-week quarantine and pre-arrival molecular test for COVID-19.

The protest was dubbed the “Freedom Rally” against the federal mandate for cross-border truckers.

Up to 26,000 of the 160,000 drivers who make regular trips across the Canada-U.S. border are likely to be sidelined as a result of the vaccine mandate, CTA and the American Trucking Associations (ATA) were reported to say.

As a national truck convoy passed through Windsor, Ont. on Sunday, before heading toward Ottawa. Transport trucks choked Huron Church Road in a protest by some drivers.

Windsor police advised the public to avoid the area as much as possible.

Organized by Canada Unity, an anti-public-health-mandate group, the convoy is expected to continue until Jan. 26.

The CTA issued a statement Sunday, denouncing protests on highways, roads, and bridges.

“CTA believes such actions — especially those that interfere with public safety — are not how disagreements with government policies should be expressed,” the statement said.

CTA reportedly said that most people in the industry are vaccinated and the vaccination rate among truck drivers is similar to that of the general public.