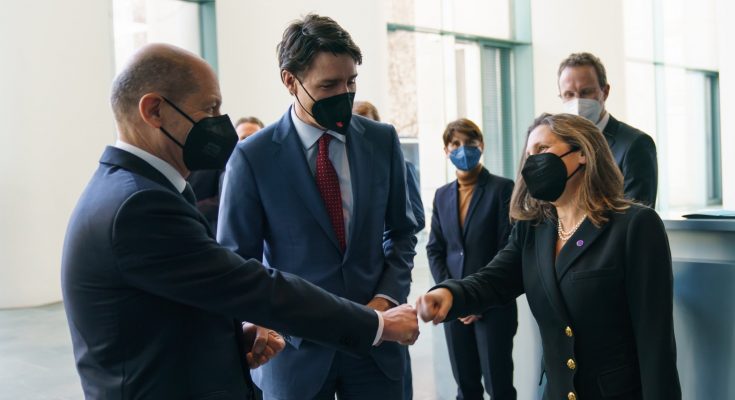 Warsaw/CMEDIA: Canada’s Prime Minister Justin Trudeau arrived in Poland on Thursday, where an estimated two million Ukrainians including hundreds of children have sought refugee in the face of Russian bombardment that has targeted civilians.

Poland’s Prime Minister Mateusz Morawiecki told Trudeau that they were meeting at a turning point in history as the Canadian PM was about to come face to face with Europe’s refugee crisis created by Russia’s invasion of Ukraine, something unimaginable in the third decade of the 21st century.

Praising Poland for its extraordinary welcome of Ukrainians fleeing for their lives, Trudeau told Morawiecki that he was impressed with the Polish soldiers he met earlier this week at the NATO base in Latvia, where Canada is commanding a multinational battlegroup.

Before Trudeau left Berlin, he gave a major foreign policy speech at a leading German think tank and answered questions from an international audience where he said he believed Russian President Vladimir Putin would be held accountable before the International Criminal Court one day for war crimes

Trudeau affirmed that while Canada’s doors are wide open to Ukrainian asylum seekers, their first stop will be somewhere in Europe.

Danny Glenwright, the president of Save the Children Canada, said that he is advocating with European Union officials and others to help one million children who fled Ukraine so far, reach safety and protection

“The reality is, when it comes to the actual fighting, the Ukrainians are fighting alone. They’re fighting for all of us,” Freeland reportedly said as Ukrainian President Volodymyr Zelensky’s repeated calls on to NATO for a no-fly zone to protect his country were not complied with.

Joly said Canada is working closely with the United Nations High Commissioner for Refugees throughout eastern Europe to find ways to get refugees to Canada after negotiating safe passage agreements.

In Warsaw, Trudeau is expected to meet with U.S. Vice-President Kamala Harris to discuss Ukraine crisis.

He met Wednesday with German Chancellor Olaf Scholz and their talks focused on the need for an immediate ceasefire in Ukraine and a desire to end the war without further escalation.

Trudeau also announced Wednesday that another $50 million in specialized equipment, including Canadian-made cameras for surveillance drones, to help Ukraine defend itself would be sent by Canada.

Besides, Canada would increase its matching donations to the Red Cross by $20 million to support immediate and ongoing relief efforts in the region, announced Trudeau on Thursday.

In addition, half of Canada’s $100 million contributions to humanitarian aid in the region will be earmarked for the Ukrainian crisis and added his government will invest $117 million in efforts to speed up refugee applications.