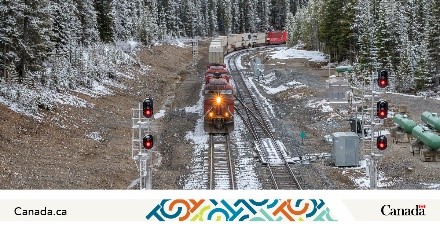 Ottawa/CMEDIA: Being committed to protecting Canadians who live and work along rail lines, the Government of Canada continues to encourage railways to use the most effective tools available to reduce the risk of serious accidents.

Implementation of Enhanced Train Control (ETC) technologies in Canada was announced today by the Minister of Transport, Omar Alghabra in Transport Canada’s Publication of a Notice of Intent in the Canada Gazette, Part I which provides more safety in transporting people and goods across the country’s vast railway network.

“The safety benefits of Enhanced Train Control technologies are widely recognized when it comes to helping prevent certain railway accidents caused by human behaviour. This Notice of Intent is a first step, and  successfully introducing this technology to Canada will involve working closely with industry, labour representatives and other stakeholders to develop new approaches, standards and protocols. Enhanced Train Control technologies represent an innovative means to further improve rail safety in Canada,” said Omar Alghabra in a news release today

The Notice of Intent describes an approach to implementing ETC in Canada that is based on extensive work conducted with railways and labor representatives with a focus on having railway companies tailor investments according to the level of safety risk posed by individual railway corridors.

ETC technologies with more advanced levels of functionality would be used in higher-risk corridors (i.e., to stop the movement of trains to prevent collisions with other trains, derailments caused by excessive train speed, or prevent trains from entering unauthorized areas of tracks).

ETC technologies, with the basic level of functionality, would be used in lower-risk corridors to alert train crews to potential danger (such as exceeding speed restrictions or upcoming stop signal indications).

Recognizing the importance of working with the railway industry, labor representatives and other stakeholders, the Notice of Intent encourages feedback and future collaboration on the implementation of Enhanced Train Control in Canada.

Transport Canada continues to work with the railway industry to make our railway system even safer for Canadians.