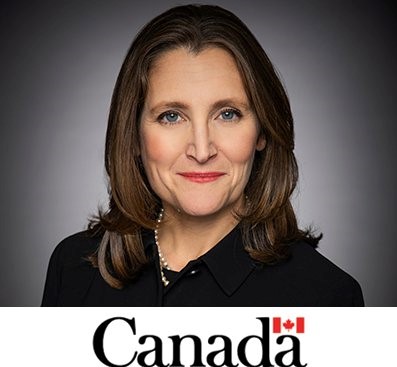 Addressing the economic situation in Canada and globally, Freeland brought to notice that despite Canada’s very strong jobs recovery and GDP rebound, there is still uncertainty in the months ahead in Canada, and globally, including with respect to global inflation and supply chain pressures.

Freeland highlighted the federal government’s commitment since the start of the pandemic, to providing the necessary tools necessary to fight against COVID-19, including vaccines, rapid tests, and therapeutics.

Freeland said that in December, eligibility for the Local Lockdown Program and Canada Worker Lockdown Benefit to support workers and businesses in the face of new public health restrictions were expanded by the federal government adding that to date, 8 out of every 10 dollars provided in Canada to fight COVID-19 and support Canadians. were represented by the investments by the federal government.

Since the pandemic began, nearly a quarter of Canada’s GDP amounting $511.6 billion has been invested by the federal government to support Canadians, including $63.7 billion for protecting health and safety.

The federal government took on this responsibility because, when the pandemic began, Freeland underscored, there was concern about whether provinces had the fiscal space needed to support Canadians through the crisis.

Apart from supporting a stronger economy across Canada, these significant financial contributions, combined with other federal response measures, directly increased provincial and territorial revenues, which, unlike federal revenues, did not go down and even slightly increased during this unprecedented global disruption.

During the meeting, Finance Ministers discussed the importance of coordination of taxes and the necessity for all orders of government to work together to improve economic growth in Canada including by bringing down barriers to interprovincial trade. Finance Ministers also discussed how they can continue working together to support Canada’s health care system during the fight against COVID-19 and beyond.

Commitment to work together to finish the fight against COVID-19 and support economic growth in Canada was also reaffirmed by the Ministers.