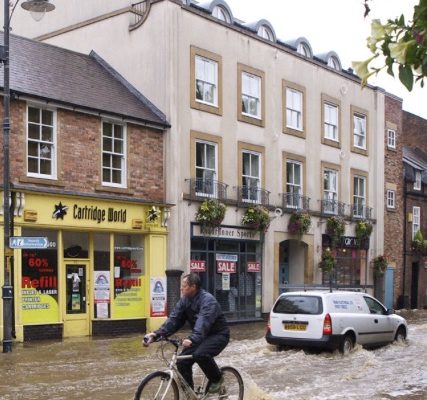 Representative image of BC floods. Wikipedia

A similar downpour in Penticton forced officials to briefly declare a local state of emergency on Monday due to a sudden rainstorm and flash flooding caused over Okanagan city prompted the evacuation of 16 properties.

But due to the subsiding of the levels of the Kelowna-area waterway, the River Forecast Centre has downgraded Mission Creek from a flood watch to a high streamflow advisory.

Nevertheless, advisories remain posted across most of southeastern and southern B.C., including the Fraser River from Quesnel to the ocean.

Sections of the Thompson, South Thompson, Chilcotin, and Nechako rivers are under Flood watches and a flood warning is still up for parts of the Quesnel River near Quesnel.

Many B.C. regions are being called by Environment Canada for thundershowers through the day with forecasters saying that there is the potential for more localized flooding, although exact locations and intensity of rainfall are uncertain.