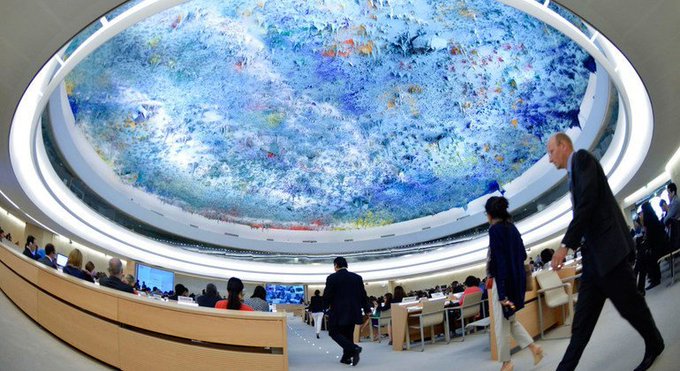 Ottawa/CMEDIA: Mélanie Joly, Canadian Minister of Foreign Affairs in her address to the United Nations Rights Council on Feb 28 said the creation of the Human Rights Council and the Office of the High Commissioner for Human Rights was a milestone and added, “in our common efforts to advance human rights, gender equality, Indigenous rights, the rights of persons with disabilities and the LGBTI community and all those who seek affirmation and protection of the dignity of the person,” the news release reported on Feb 28.

Joly said that the irony is that we meet at such a moment: when the capital of a sovereign state and member of this council, Ukraine, is under direct threat.

“Explosions are being felt as many seek refuge in underground subway stations. The images flashing across our collective screens of Ukraine are heartbreaking….killing innocent people, forcing Ukrainian people to flee their homes and their country…The Russian invasion of Ukraine—the largest threat to global peace in 7 decades—is a cold, calculated, and carefully planned series of events of the Kremlin,” said the news release.

Over the past several months, Russia was positioning troops and equipment to invade Ukraine and Russian military buildups along the border were continuing to grow but Russia lied that there was nothing to worry about and it was withdrawing troops and that its military exercises in Belarus would end on the 20th of February.

But both Russia and Belarus lied when Belarus served as a launchpad for Russian forces as they invaded Ukraine.

Continuing her speech, Joly said that Russia’s leadership has chosen lies and thuggery in an attempt to undermine the rule of law and human rights and is solely responsible for this crisis.

Joly stressed that Russian-speaking Ukrainians and Ukrainian-speaking peoples are, first and foremost, global citizens and entitled to the same fundamental right to live peacefully under international law and this council, as well as Canada, stands for that.

The Russian regime is challenging the international system of peace and law and has tried to make a mockery of our international system, to force a reversion to a “might-makes-right” world, said Joly and added that all states are equal and sovereign and that human rights and fundamental freedoms are universal and essential to human dignity.

Russia’s unprovoked, illegal and unjustifiable invasion of Ukraine is a serious violation of the United Nations Charter and is endangering the lives of millions of innocent people. Russia’s actions seriously threaten the human rights of Ukrainians, including the right to life, liberty and the security of the person and Canada stands by Ukraine and Ukrainians as they fight for their freedom and for the right to choose their own future, said Joly.

“We call on Russia to respect the human rights not only of Ukrainians but of its own citizens, who by thousands have taken to the streets in protest against this unjust war…Ukraine’s sovereignty and territorial integrity must be respected…Their human rights must be truly protected…The world is watching, and future generations will remember how we confronted this moment. Let it be said of us that we overcame narrow interests to speak in 1 voice against tyranny and aggression and in favor of peace and freedom,” Joly said towards the end of her speech reported by a news release.