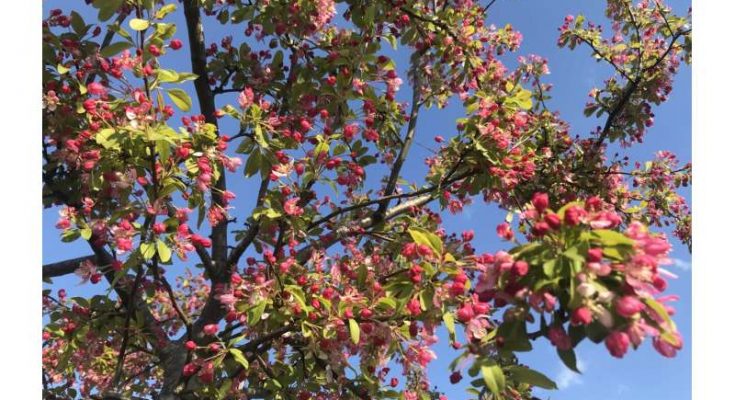 Apple blossoms during spring. Climate change is causing plants in the UK to flower a month earlier on average, which could have profound consequences for wildlife, agriculture and gardeners. Credit: Ulf Büntgen

CMEDIA: Climate change is causing plants in the UK to flower a month earlier on average, which could have profound consequences for wildlife, agriculture, and gardeners, https://phys.org/news reports said.

Using a citizen science database with records going back to the mid-18th century, a research team led by the University of Cambridge has found that the effects of climate change are causing plants in the UK to flower one month earlier under recent global warming.

The researchers based their analysis on more than 400,000 observations of 406 plant species from Nature’s Calendar, maintained by the Woodland Trust, and collated the first flowering dates with instrumental temperature measurements.

While the first spring flowers are always a welcome sight, this earlier flowering can have consequences for the UK’s ecosystems and agriculture. Other species that synchronize their migration or hibernation can be left without the flowers and plants they rely on—a phenomenon known as ecological mismatch—which can lead to biodiversity loss if populations cannot adapt quickly enough.

The change can also have consequences for farmers and gardeners. If fruit trees, for example, flower early following a mild winter, entire crops can be killed off if the blossoms are then hit by a late frost.

“We can use a wide range of environmental datasets to see how climate change is affecting different species, but most records we have only consider one or a handful of species in a relatively small area,” said Professor Ulf Büntgen from Cambridge’s Department of Geography, the study’s lead author. “To really understand what climate change is doing to our world, we need much larger datasets that look at whole ecosystems over a long period of time.

The UK has such a dataset: since the 18th century, observations of seasonal change have been recorded by scientists, naturalists, amateur and professional gardeners, as well as organizations such as the Royal Meteorological Society. In 2000, the Woodland Trust joined forces with the Centre for Ecology & Hydrology and collated these records into Nature’s Calendar, which currently has around 3.5 million records going back to 1736.

“Anyone in the UK can submit a record to Nature’s Calendar, by logging their observations of plants and wildlife,” said Büntgen. “It’s an incredibly rich and varied data source, and alongside temperature records, we can use it to quantify how climate change is affecting the functioning of various ecosystem components across the UK.”

For the current study, the researchers used over 400,000 records from Nature’s Calendar to study changes in 406 flowering plant species in the UK, between 1753 and 2019. They used observations of the first flowering date of trees, shrubs, herbs, and climbers, in locations from the Channel Islands to Shetland, and from Northern Ireland to Suffolk.

The researchers classified the observations in various ways: by location, elevation, and whether they were from urban or rural areas. The first flowering dates were then compared with monthly climate records.

To better balance the number of observations, the researchers divided the full dataset into records until 1986, and from 1987 onwards. The average first flowering advanced by a full month and is strongly correlated with rising global temperatures.

“The results are truly alarming, because of the ecological risks associated with earlier flowering times,” said Büntgen. “When plants flower too early, a late frost can kill them—a phenomenon that most gardeners will have experienced at some point. But the even bigger risk is an ecological mismatch. Plants, insects, birds, and other wildlife have co-evolved to a point that they’re synchronized in their development stages. A certain plant flower, it attracts a particular type of insect, which attracts a particular type of bird, and so on. But if one component responds faster than the others, there’s a risk that they’ll be out of synch, which can lead species to collapse if they can’t adapt quickly enough.”

Büntgen says that if global temperatures continue to increase at their current rate, spring in the UK could eventually start in February. However, many of the species that our forests, gardens, and farms rely on could experience serious problems given the rapid pace of change.

“Continued monitoring is necessary to ensure that we better understand the consequences of a changing climate,” said co-author Professor Tim Sparks from Cambridge’s Department of Zoology. “Contributing records to Nature’s Calendar is an activity that everyone can engage in.”