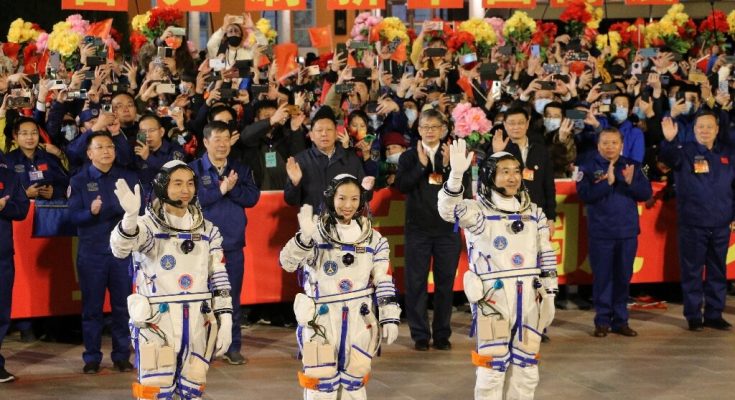 Astronauts Ye Guangfu, Wang Yaping and Zhai Zhigang, wave at a departure ceremony before their launch on the Shenzhou 13 spacecraft in October 2021.

Three Chinese astronauts returned to Earth on Saturday after 183 days in space, ending China’s longest crewed mission as it continues its quest to become a major space power.

The Shenzhou-13 spacecraft was the latest mission in Beijing’s drive to rival the United States, after landing a rover on Mars and sending probes to the Moon.

Live footage from state broadcaster CCTV showed the capsule landing in a cloud of dust, with the ground crew who had kept clear of the landing site rushing in helicopters to reach the capsule.

The two men and one woman—Zhai Zhigang, Ye Guangfu, and Wang Yaping—returned to Earth shortly before 10 am Beijing time (0200 GMT), after six months aboard the Tianhe core module of China’s Tiangong space station.

The ground crew applauded as the astronauts each took turns to report that they were in good physical condition.

Zhai was the first to emerge from the capsule roughly 45 minutes after the landing, waving and grinning at cameras as he was lifted by the ground crew into a specially designed chair before being bundled into a blanket.

“I’m proud of our heroic country,” Zhai said in an interview with CCTV shortly after leaving the capsule. “I feel extremely good.”

The trio originally launched in the Shenzhou-13 from China’s northwestern Gobi Desert last October, as the second of four crewed missions during 2021-2022 sent to assemble the country’s first permanent space station—Tiangong, which means “heavenly palace.”

Wang became the first Chinese woman to spacewalk last November, as she and her colleague Zhai installed space station equipment during a six-hour stint.

Mission commander Zhai, 55, is a former fighter pilot who performed China’s first spacewalk in 2008, while Ye is a People’s Liberation Army pilot.

The trio has completed two spacewalks, carried out numerous scientific experiments, set up equipment, and tested technologies for future construction during their time in orbit.

The astronauts spent the past few weeks tidying up and preparing the cabin facilities and equipment for the crew of the incoming Shenzhou-14, expected to be launched in the coming months.

Six months will become the normal astronaut residence period aboard the Chinese space station, according to state broadcaster CCTV.

The world’s second-largest economy has poured billions into its military-run space program, with hopes of having a permanently crewed space station by 2022 and eventually sending humans to the Moon.

The country has come a long way in catching up with the United States and Russia, whose astronauts and cosmonauts have decades of experience in space exploration.

But under Chinese President Xi Jinping, the country’s plans for its heavily-promoted “space dream” have been put into overdrive.

Besides a space station, Beijing is also planning to build a base on the Moon, and the country’s National Space Administration said it aims to launch a crewed lunar mission by 2029.

China has been excluded from the International Space Station since 2011, when the US banned NASA from engaging with the country.

While China does not plan to use its space station for global cooperation on the scale of the ISS, Beijing has said it is open to foreign collaboration although the scope of that cooperation is not yet clear.

The ISS is due for retirement after 2024, although NASA has said it could remain functional until 2030. 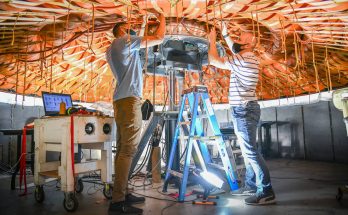 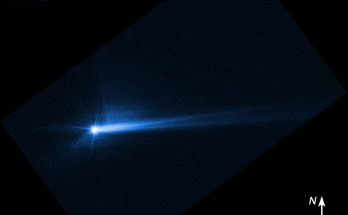