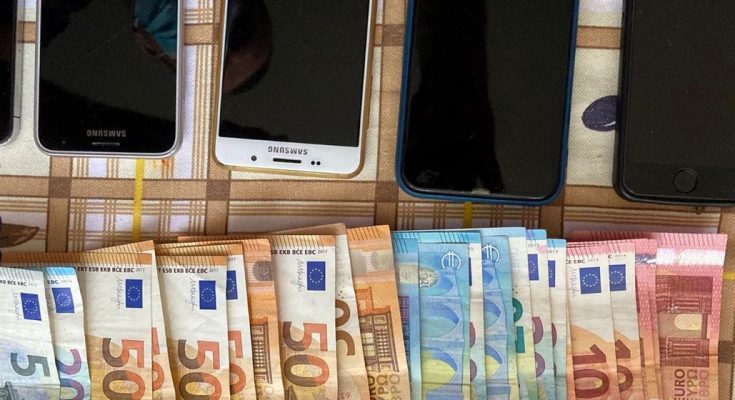 Securing evidence for Human trafficking. Credit: ©CCTP Evidence seized in an investigation into the activities of a criminal group specialized in child trafficking for sexual exploitation.

“Slave” tattoos, electric shock devices, and plastic bracelets. These are examples of the kinds of objects and physical abuses deployed by human traffickers to control, torture, and brand their victims, which are crucial to securing a conviction.

The plastic bracelets the women wore in a bar in Argentina indicated the number of men they had been forced to have sex with. In Thailand, men and children from Myanmar were exploited in the fishing industry: an electric shock device was used if they refused to work.

And a Chinese symbol for “slave” was tattooed on the ankle of a woman in the United States.

These tactics were later used against the criminals themselves in court, when they provided vital evidence that led to a guilty verdict for human trafficking – particularly important in such as complex crime, that is difficult to prove.

Despite its prevalence in all regions of the world, there are persistent low levels of prosecutions and convictions of traffickers.

“One of the main challenges is the timely collection of sufficient and admissible evidence. Certain skills are needed to do this,” says Davor Raus, a criminal justice expert from the UN Office on Drugs and Crime (UNODC). “We train police officers and investigators how to legally obtain evidential items which can prove that a crime of human trafficking has been committed.”

Currently, criminal justice systems rely heavily on verbal or written statements from the victims when investigating and prosecuting cases of human trafficking.

However, according to experts from the UNODC’s Human Trafficking and Migrant Smuggling Section, such testimonies can be difficult to obtain, and often lack sufficient credibility needed for a court ruling against a trafficker.

Data from the latest UNODC Global Report on Trafficking in Persons showed that in 2018 almost 50,000 human trafficking victims were detected in 135 countries, while 88 countries reported just over 3,500 convictions.

Some countries do not give victims the protection they need, so they are reluctant to cooperate with law enforcement. Others are afraid their traffickers will harm them or their families or do not trust the authorities that are questioning them.

In some cases, victims are related to the traffickers, feel a sense of love or loyalty towards them, or have been indoctrinated to tell a certain story.

“In most cases, victim testimonies are vital, because only the person who has been trafficked can provide the context,” says Rahel Gershuni, a lawyer and international expert on combatting human trafficking.

©CCTPThe gun used in a case of human trafficking for exploitation in domestic labor to scare the victims and maintain control.

Peeling away the layers

“However, in view of the typical weaknesses that plague victim testimonies, it is necessary to gather other forms of evidence and evaluate on the totality of the evidence, rather than limiting it to the victim statement.”

Ms. Gershuni, who led the drafting of UNODC’s Global Digest on Evidential Issues in Trafficking in Persons Cases, adds that victims often tell their story in segments “like the peeling of an onion”, with contradictions, inconsistencies, and delays.

“This can give the impression the victim is not credible. But this behavior may be explained by the vulnerabilities of the victim and the trauma they have experienced,” she adds.

Vulnerabilities can include the young age of the victim, the unfamiliar environment, or an inability to communicate effectively.

Victims can suffer memory lapses due to their trafficking ordeal, and if they need to face their traffickers in court, maybe too scared or intimidated to speak the truth.

“Therefore, it is essential that the court considers the experiences of the victim before, during, and after the trafficking process and how this can influence a statement,” says Ms. Gershuni.

© UNICEF/Juan HaroAbdul, from Darfur, was forced to live in a house in Libya and work. He is now seeking asylum.

During UNODC workshops participants learn about the various types of evidence that can be used in trafficking cases.

This can include biological traces that can come from bloodstains, saliva samples and semen, and tissue samples from skin, nails, teeth, bone, or hair, which can be analyzed by forensic scientists.

Objects such as money, mobile phones, condoms, and sex toys found in the possession of the suspects or at a crime scene can also provide evidence of exploitation.

“There was a case involving three physically disabled Slovakian men who had been driven to Belgium by a Hungarian trafficker. He forced them to beg all day outside a supermarket and took all their money,” says UNODC’s Davor Raus.

“The guilty verdict was supported by objects found in the defendant’s car where the victims had been sleeping – pillows, a large number of coins and signs in French asking for money.”

Photographs or videos of chains, locks, and high fences can also support statements about victims’ living conditions or their presence in exploitative premises.

In a case in Australia, a video of the bedroom where victims of sexual exploitation slept, showed a lack of furniture, supporting the prosecution case that the victims were held under conditions of slavery.

“It’s important that law enforcement officials not only understand how to collect vital evidence but also how to handle it properly. So, this aspect is covered too in our training sessions,” says Davor Raus.

“If evidence is not collected, preserved, and presented according to national standards it can be rejected in court.  A case against a trafficker could collapse, so this is what is at stake here,” he concludes.