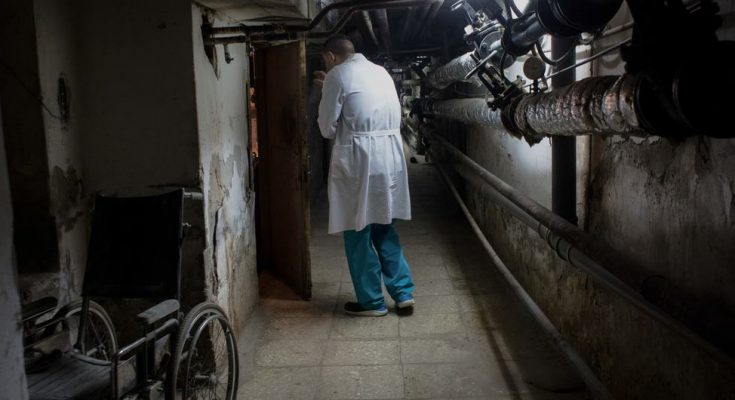 A doctor walks in a basement used to hide patients during air raids, at the Central District Hospital in Brovary, Ukraine. Credit: © WHO/Anastasia Vlasova

The war in Ukraine is not only a “horror unfolding before our eyes”, but also an “assault on some of the most vulnerable people and countries” across the world, said the UN chief on Wednesday, convening the first meeting of the steering committee which will guide the creation of a new UN crisis response group to help mitigate the worldwide impact of Russia’s invasion.

Secretary-General António Guterres said that first and foremost, Ukraine needed support, towards ending the war, and to help the millions who have fled, return home.

With donor fatigue setting in across the developed world, countries must come together, rich and poor, to find global solutions, “because this is a global crisis.

“No country will be able to insulate itself from a meltdown of the global economic system; from the domino effect of hoarding food or fuel; or from the long-term impact of increased poverty and hunger”, he said.

“We need to get rid of bottlenecks, prevent hoarding and speculation, reform finance frameworks, to allow those that need money to buy things that are essential for their countries to have access to those funds – revisiting rules and eligibility criteria whenever necessary. Every country that needs support must be able to access it.”

This, he said, was the remit of the Global Crisis Response Group, to include heads of State and government leaders, who have already volunteered support.

“I have every confidence that this Steering Committee will provide the direction and focus needed for our decisions…From vulnerability indices to support strategies, we already have many of the pieces in place. We need to repurpose, expand and build on them to create an effective, coordinated, system-wide response.”

Tackling the global impact of the war, said the UN chief, will require the same unity and solidarity we have seen in the support given to Ukrainian refugees.

“We must seize this moment and move forward together.”

“We must seize this moment and move forward together.”

Earlier in the day, briefing journalists in Geneva, UN health agency chief Tedros Adhanom Ghebreyesus, said that a month since Russia’s invasion of Ukraine, people’s health needs there were dire, and only getting worse.

The situation is particularly critical in the coastal city of Mariupol and elsewhere, Tedros said, where the World Health Organization (WHO) has not been able to dispatch a humanitarian convoy because of the ongoing violence.

Other Ukrainian cities have received 150 tonnes of medical supplies from the WHO hub in Lviv in western Ukraine, but access to many locations “remains blocked”.

Tedros issued an appeal to Russia “to stop the war”, before condemning ongoing attacks on hospitals, patients, and medical staff:

“WHO has now verified 64 attacks on health care since the start of the war and we are in the process of verifying further attacks. Attacks on health must stop. Health systems, facilities and workers are not and should never be a target.”

He said that WHO also had concerns around the “integrity and safe operation of nuclear and chemical facilities.

“WHO is working with the International Atomic Energy Agency (IAEA), and we continue to call on all sides to minimize the risk of a nuclear or chemical accident, which could have catastrophic consequences for human health.”

Summing up the latest global situation regarding the spread of COVID-19, he said the increase in COVID-19 cases continues, “driven by large outbreaks in Asia and a fresh wave in Europe.”

Several countries are now seeing their highest death rates since the beginning of the pandemic, he remarked.

This reflects the sheer speed of the Omicron variant, and the heightened risk of death for the unvaccinated.

“We all want to move on from the pandemic. But no matter how much we wish it away, this pandemic is not over. Until we reach high vaccination coverage in all countries, we will continue to face the risk of infections surging, and new variants emerging that evade vaccines.

Even as some high-income countries propose a second booster dose, one-third of the world’s population remains unvaccinated.

But he said there were some “promising signs” of progress.

In Nigeria, vaccine uptake was dramatically increased when supply stabilized, and planning was done on how to effectively distribute vaccines, the WHO chief noted.

WHO will continue pushing for a 70% vaccination target for every country, by the middle of this year, with priority given to health workers, older people and other at-risk groups.