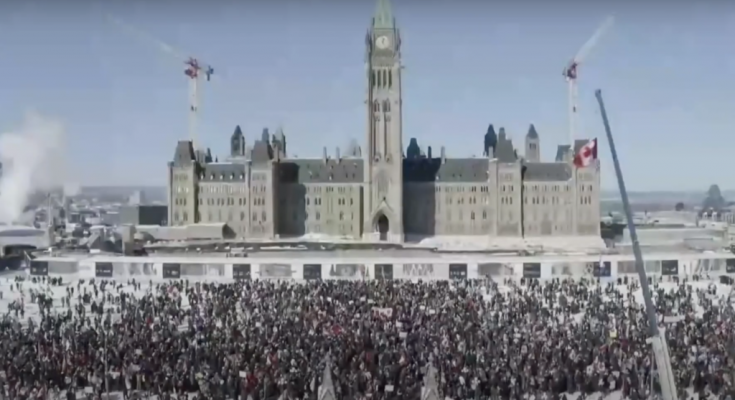 Ottawa/CMEDIA: Protesters of the convoy of truckers were issued a fresh call from Ottawa’s mayor, Jim Watson, to leave on Monday, saying Ottawa residents had been patient with the protesters’ disturbances and harming small businesses.

As the demonstration protesting COVID-19 vaccine mandates and other public health restrictions enters another day. Ottawa residents are being urged to avoid non-essential travel into the downtown core and several businesses will be closed today,

Hundreds of trucks remained parked on Wellington Street and other roads throughout the downtown core and constantly blaring horns and fireworks at all hours.

Ottawa police acknowledged Sunday evening that it’s aware many demonstrators have announced their intentions to stay.

Many of the COVID-19 vaccination clinics at the University of Ottawa, the Centretown Community Health Clinic, and the Ottawa Public Library Main and Rideau branches for the day are closed due to the protest.

The Rideau Centre will also remain closed on Monday.

On Friday the “Freedom Convoy” began arriving in Ottawa as part of a cross-country campaign to protest new vaccination rules at the Canada-U.S. border and other public health restrictions.

Throughout the weekend, people have carried Canadian flags and signs around downtown Ottawa saying “Make Canada Free Again!”, “No More Vax Pass”, “We Support Truckers”, “Freedom to Choose”, “Freedom Not Fear”, and “Freedom for All.”

While Ottawa police have said it’s unclear when the protest will end, “Freedom Convoy” organizer Tamara Lich reportedly told a gathering on Parliament Hill Sunday morning, “We are not leaving until all of you and all of your kids are free.”