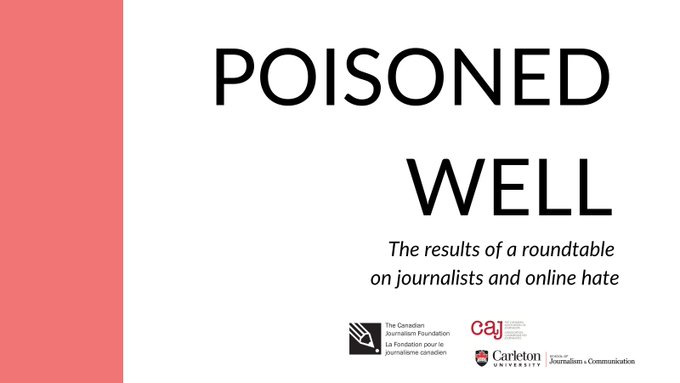 Toronto/CMEDIA: The Canadian Association of Journalists (CAJ) and the Canadian Journalism Foundation (CJF) have released “Poisoned Well,” the troubling findings of an industry roundtable on journalists and online hate.

“Freedom of the press is integral to a healthy democracy,” says Natalie Turvey, CJF President, and Executive Director. “The online abuse suffered by too many journalists today goes well beyond critical discourse and, in many cases, harms their safety and well-being in the workplace. This report is a call to action to our industry, government officials, and the broader Canadian public.”

A roundtable was held by the CAJ and Carleton University on Oct. 21, 2021, in response to repeated instances of Canadian journalists, particularly women and racialized media, being targeted with online hate and harassment.

Commissioned by the CJF, the report shares the findings of that roundtable with the broader public.

Besides learning from journalists about their first-hand experiences with online hate and harassment, the roundtable also addressed workplace responses, the role of law enforcement, as well as discussions about security and self-care.

The event concluded with a brainstorming session led by Irene Gentle, the Toronto Star’s VP, Inclusion and Strategic Partnerships, and Steph Wechsler, the managing editor of J-Source and co-lead on the Canada Press Freedom Project, to identify calls to action.

More than 90 journalists across Canada parcipated in the roundtable.

“We’ve heard the ground truth about the multi-faceted professional and psychological impacts online harassment has on journalists – and how it negatively affects their ability to do their jobs properly,” says CAJ president Brent Jolly.

“It is crystal clear that finding productive ways to combat online harassment of journalists will require an unprecedented amount of cross-industry collaboration and long-term commitments from multiple stakeholders—including government, law enforcement and Big Tech. All are vitally important because the health and safety of our democracy is at stake.”

Written by freelance journalist, Kat Eschner, the 11-page report detailing key findings, discussion topics, calls to action and a full list of speakers and facilitators can be found here.

About the Canadian Association of Journalists

Founded in 1990 the Canadian Association of Journalists (CAJ) was earlier known as the Centre for Investigative Journalism.

A professional organization with more than 1,200 member journalists spread across Canada, the CAJ’s primary roles are public-interest advocacy work and professional development for its members.

About The Canadian Journalism Foundation

Founded in 1990, The Canadian Journalism Foundation promotes, celebrates, and facilitates excellence in journalism.

The foundation also runs a prestigious awards and fellowships program which features an industry gala celebrating outstanding journalistic achievement and the value of professional journalism by a gathering of news leaders, journalists, and corporate Canada.

Through monthly J-Talks, a public speakers’ series, the CJF facilitates dialogue among journalists, business people, academics, and students about the role of the media in Canadian society and the ongoing challenges for media in the digital era. The foundation also fosters opportunities for journalism education, training, and research.