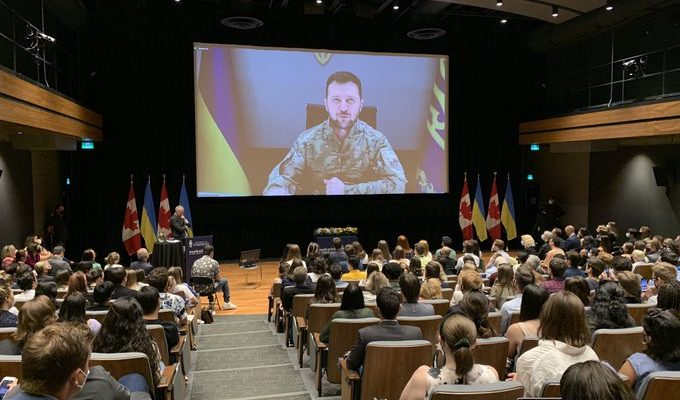 An event focussing on how Canadian universities can help Ukraine during the conflict is being hosted by the University of Toronto’s Munk School of Global Affairs and Public Policy.

University students across Canada were told on Wednesday by Ukrainian President Volodymyr Zelensky via video link that his country remains committed to democracy nearly four months after Russia invaded.

Introduced by Chrystia Freeland, Canada’s finance minister, Zelensky took questions from students across Canada, touching on a variety of topics including how international communities could best support Ukraine and what prompted him to leave acting for public service.

When asked by one of the students who his role models are and from where he got his inspiration, Zelensky said he drew strength and inspiration from ordinary Ukrainian people.

Zelensky said that while he is grateful for international support, including weapons, he added that information including the Internet and social media has proven to be a powerful weapon for Ukraine.

Zelensky urged people not to “become tired of the war” and to continue rallying their communities to action.