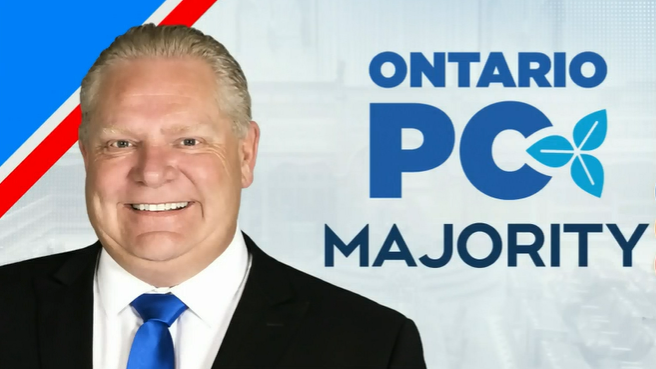 Doug Ford has reportedly been re-elected as premier of Ontario with a majority government for four more years.

Ford told the crowd about an hour after the results poured last night that today’s victory isn’t about him isn’t about the party and belongs to every worker who knows that they deserve better.

Ford also won a second term as representative in his riding of Etobicoke North.

Being the frontrunner of the election for months, 57-year-old Ford has been leading in nearly every poll in both general party support and top choice for premier.

Ford entered provincial politics in 2018 after serving for eight years as a city councilor in Toronto. In his first election, he was able to defeat Kathleen Wynne, ending the Ontario Liberal Party’s 15-year reign in the province.

Despite his many years of public service, Ford branded himself more as a businessman and builder, and always promised to get new projects done

Under his leadership in 2018, Doug had promised that Ontario would be open for business and that he would bring in an era of economic growth and prosperity.

This time around, he focused on the building of new hospitals and long-term care as well as infrastructures such as Highway 413 and the Bradford Bypass.

Although Andrea Horwath, who had led the NDP party for 13 years was reportedly re-elected in her riding of Hamilton Centre on Thursday, she told supporters that it was time for her to step down after 4 elections from her position as a leader

Meanwhile, Steven Del Duca lost his seat in Vaughan-Woodridge and failed to secure the position of Official Opposition also stepped down as leader of the Ontario Liberal Party