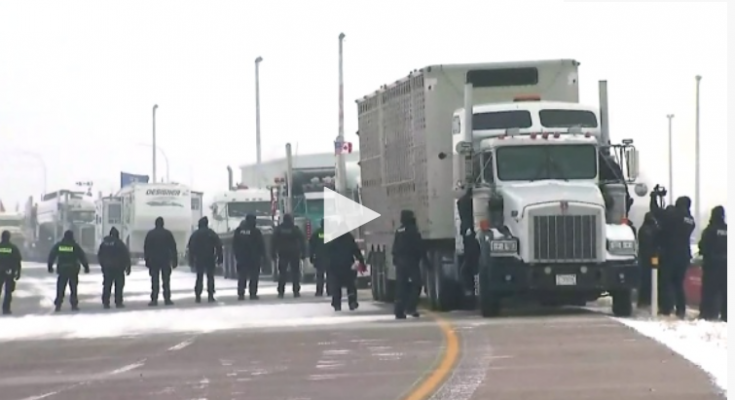 Alberta/CMEDIA: Alberta Premier Jason Kenney called on a convoy of truck protesters in Canada’s Alberta to end their demonstration in Coutts, after some protesters reportedly breached police barriers to join the demonstration Tuesday followed by a head-on collision resulting in an assault.

Calling the border blockade “unlawful” during a Tuesday news conference, Kenney urged the protesters to make their voices heard in a peaceful manner.

“We have now received reports of RCMP officers being swarmed,” he said. “That’s not peaceful. For our situation here in Alberta, once again I would plead for calm and ask folks whose tempers may be running high to channel that frustration into peaceful and lawful protest.”

Since Saturday, the highway at the U.S.-Canada border in Coutts, Alta. has been blocked by commercial trucks, vehicles, and camper vans to protest over a federal vaccine mandate for cross-border truckers, which took effect last month.

“As of this morning, further action is being taken by the Alberta RCMP as this blockade continues to impede the ability for emergency agencies to provide full services to area residents,” the RCMP said in a statement Tuesday.

“It has also negatively impacted the flow of goods and services, and impedes the public’s freedom of movement.”

Kenney urged people to stay away from the area to let the RCMP carry out their action against the blockade. About 100 individuals, said Kenney, are preventing thousands of truckers from delivering food, goods, and medicine to Albertans and Canadians.

Kenney also emphasized that it is against the law to block a key piece of infrastructure.