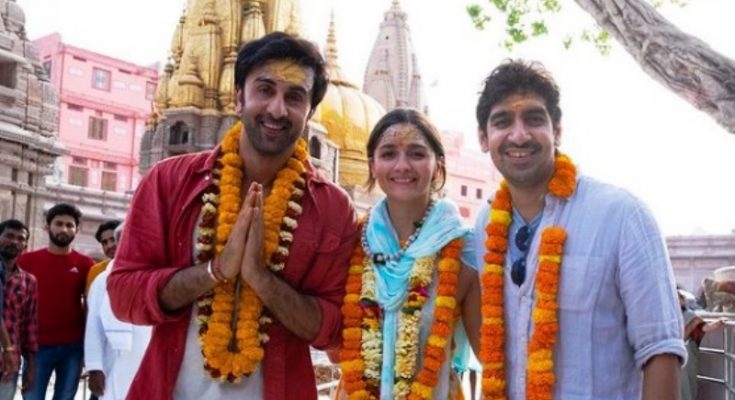 Mumbai/IBNS: Two days ahead of Brahmastra’s release, the year’s most awaited film, its stars Ranbir Kapoor and Alia Bhatt have faced protests during their promotional tour in Madhya Pradesh. They had to cancel their visit to an iconic temple in Ujjain as protesters held up black flags and raised slogans to block them.

The star couple, who were in Ujjain to promote “Brahmastra Part-1: Shiva” on Tuesday, returned without visiting the famous Mahakaleshwar Temple “to seek the blessings of Lord Shiva”.

The film’s director, Ayan Mukherji, later visited the temple with the Brahmastra crew.

The protests revolve around an 11-year-old comment by Ranbir where he could be heard saying in an interview: “I am a mutton, paya, beef…red meat guy. I’m a big beef guy.”

A section of social media users has been digging up Ranbir’s old interviews after his recent remarks on wife Alia’s pregnancy were criticised.

The “beef” comment has gone viral and has sparked a backlash. Some are posting the hashtag #BoycottBrahmastra on Twitter.

Speaking on this, Ayan Mukherji said: “We reached and we heard about this and I felt a little bit that let me go alone. Eventually, I had gone to seek blessings. And I just didn’t want to take Alia there in her current condition. So I went alone. Though I felt bad and I did feel they could also have come for their darshan, that is on me.”

Mukherjee said his film stands for positivity and hoped its “positive energy” would touch people.

“My thing is we must only spread warmth and positivity because that is what we all want and that is what the whole world needs. And I truly think that we worked so hard on the film, there is so much celebration of Indian culture. I feel that every single person is going to feel that positivity,” he said.

The minister denied that the star couple had been stopped from visiting the temple and claimed that officials had instead requested them to go ahead.

A huge ruckus was reported outside the Mahakaleshwar Temple in Ujjain Tuesday ahead of their visit.

A group of people, who the media called the right-wing workers, had gathered at the main gate and the conch gate meant for VVIPs to show them black flags.

The police had to use batons to bring the crowd under control.

Brahmastra, which is one of the highly anticipated films of the year, is due to release on Sept 9.