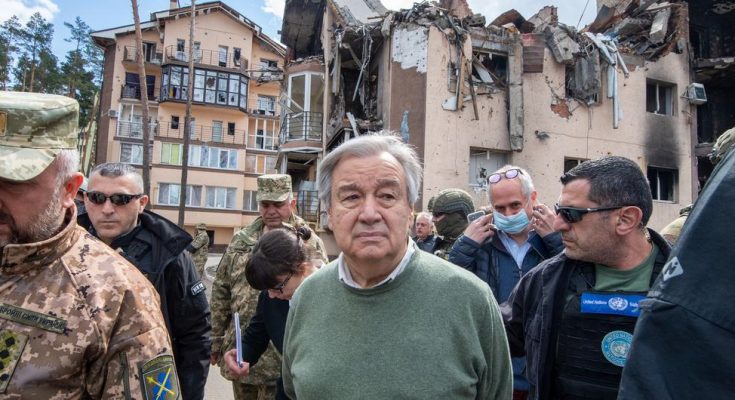 “When we see this horrendous site, it makes me feel how important it is [to have] a thorough investigation and accountability,” Mr. Guterres said, speaking from Bucha, where disturbing images of dead civilians lying in the street sparked worldwide outrage earlier this month.

Surveying destroyed buildings in Borodianka, northwest of Kyiv, the Secretary-General also called the war “an absurdity”.

“I must say what I feel. I imagined my family in one of those houses that is now destroyed and black,” he said. “I see my granddaughters running away in panic, part of the family eventually killed. So, the war is an absurdity in the 21st century. The war is evil.”

In Irpin, where Mr. Guterres visited the destroyed Irpinsky Lipki residential complex, he said that the “horrific scenario demonstrates something that is unfortunately, always true: civilians always pay the highest price”.

Earlier this month, UN rights chief, Michelle Bachelet said that she had been “horrified” by images showing the bodies of dead civilians lying in the streets of Bucha, and in improvised graves.

Speaking to UN News after the Secretary-General had returned to the capital Kyiv, UN Spokesperson in Ukraine, Kris Janowski, said that it had been “a sad and shocking experience to visit these places, they are very damaged, and the people traumatized by what has happened to them.

“The Secretary-General was visibly affected – personally affected by it. He saw his own family hypothetically in this same situation. It’s a terrifying thought for us all.

“You have villages, malls, mundane suburban scenery, suddenly disrupted by war, and littered with destroyed vehicles. There are signs of terror and destruction everywhere“, he added, but residents are clearly returning.

“You see little market stalls, the people are resilient, and life is returning as best it can. The future is unknown everywhere here, but life goes on, and people are going about their lives.

Mr. Janowski said that in Borodianka, the UN chief had spoken to the governor of the area, who said that although people were trickling back, they are still looking for bodies in some of the houses.

“You find yourself in a quite ordinary suburban environment, but you don’t know how many are dead – it’s a very traumatic experience for everyone“, said Mr. Janowski.

“For me, what I saw, brought back memories of my time working in Bosnia for the UN (in the wars following the breakup of Yugoslavia in the early 1990s).

“The UN security driver who took us there (to the three suburban areas), also happens to be from Sarajevo, and it brought back all the bad memories for those of us who were there. After the war in Bosnia and various conflicts, I never thought I would see this sort of destruction happening again in my lifetime, so close to the heart of Europe.”

Residential buildings in Borodianka, north-west of the Ukrainian capital have been heavily damaged during the conflict with Russia. Credit: UN Photo/Eskinder Debebe

Global justice must be served

Echoing the Secretary-General’s call for justice for the victims of atrocities in Ukraine, the Prosecutor of the International Criminal Court (ICC) said that he favoured neither Russia nor Ukraine, in the search for the truth.

“This is not really a time for talking, it’s a time for action. International law can’t be a passive spectator. It can’t be sedentary, it needs to move with alacrity and to protect and to insist on accountability,” said Karim Khan, speaking to journalists on Wednesday evening outside the Security Council at UN headquarters in New York.

“The law is above us, and if the law is not above us, there’s nothing below us, except the abyss.”

ICC Prosecutor Khan launched an investigation into possible war crimes and crimes against humanity on 2 March, after referral of a request by 43 States Parties.

The focus of the investigation is “alleged crimes committed in the context of situation in Ukraine since 21 November 2013”. Since the investigation opened, a team of analysts, anthropologists and investigators has already examined several locations in Ukraine, including Lviv, Kyiv and Bucha, Mr. Khan said.